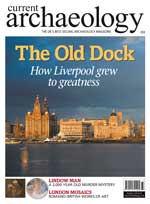 Issue 233 opens with an in-depth look at the biggest dig ever undertaken in Liverpool: the excavation of the city’s Old Dock. The Old Dock was responsible for shaping the fortunes of Liverpool, and CA examines how the city’s ingenious engineering and ambitious land reclamation are reflected in the archaeology. Following on from that, we have new research challenging previous assumptions about Lindow Man and bog bodies in general. South Wales makes an appearance in a report from Llanmaes, where a midden site has turned up some interesting results in the shape of the right forequarters of pigs. Finally, the penultimate volume of Neal’s and Cosh’s book series detailing Romano-British mosaics includes some stunning images and interesting conclusions about what makes the South-East unique.

The Old Dock: How Liverpool grew to greatness

Liverpool’s enterprising launch in 1715 of the world’s first commercial enclosed wet dock catapulted the city to international significance and changed its fortunes forever. An excavation by Oxford Archaeology North has uncovered the historic Old Dock, providing insight into the city’s long and remarkable past.

Who killed Lindow Man?
For many years, the 2,000-year-old amazingly preserved bog body of Lindow Man was believed to be the victim of an Iron Age murder-sacrifice. But is this the case? Current Archaeology Features Editor Neil Faulkner examines fresh evidence that throws new light on this ancient whodunnit.

The ‘champion’s portion’? : prehistoric feasting at Llanmaes
An interesting midden site in south Wales has turned out to contain important and mysterious evidence for Bronze Age feasting. Marvellous metalwork, plentiful pottery and a unique assemblage of pig bones has archaeologists asking: is this evidence of the epic champion’s portion?

Roman Mosaics of Britain: a view from the South East
The south-east of Britain is set apart from the rest of the country, in mosaic terms, by several defining characteristics. Current Archaeology News Editor Christopher Catling examines David Neal’s and Stephen Cosh’s most recent volume, tackling the   region’s   specialties in great detail.

Last Word
How to present your accounts.

Reviews
A ‘Splendid Idiosyncrasy’: a prehistory at cambridge 1915-50 by Pamela Jane Smith
Prehistoric and Roman Essex by James Kemble
Landscapes of Memory by Jerry Bird

Previous Sidestone Press: Publisher of Archaeology Books Next The Old Dock: How Liverpool grew to greatness