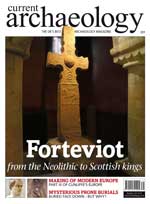 In Current Archaeology 231, we open with a fascinating account of excavations in Forteviot, where archaeologists have deiscovered a Neolithic circular enclosure that rivals both Stonehenge and the Ring of Brodgar in scale. We conclude our in-depth series on Barry Cunliffe’s new book, with the final instalment taking us through to 1000 AD.
Next, we have an investigation into prone burials; why are they so disturbing? What possible meanings are behind a face down burial? The issue concludes with an examination of the town of Burford through the lens of a new project that aims to unite archaeology and local history.

Forteviot
A University of Aberdeen team has uncovered startling evidence at Forteviot: a massive Neolithic ritual complex, as well as evidence for the origins of Scottish kingship. Did early Scottish kings use a prehistoric ceremonial centre to build their power?

The Land Between the Oceans: Part 3
The final instalment of our mini-series examining Barry Cunliffe’s new book charts the changes from Caesar to Charlemagne, concluding in AD 1000. We see Europe emerge after the imperial interlude, the decline of Scandinavia, and the dissipation of the Mediterranean civilisations.

Buried face down
Face down burials are rare and, to the modern mind, quite shocking. Were the dead being punished? Was it ritual or carelessness? Of the 600 excavated prone burials known in the world, Britain is the biggest hotspot. Using both anthropological and archaeological evidence, we explore the mystery of this obscure practice.

The Story of Burford
The Victoria County History’s new project, ‘England’s Past for Everyone’, aims to put history in motion. This feature, focusing on the picturesque town of Burford, shows how archaeology and local history can combine to reveal the truth of a town’s history.

Feedback
Chilham Mirror; Without a paddle; Pipe dream; Which Ebbsfleet?

28 May—23 August 2009
Garden and Cosmos: The Royal Paintings of Jodhpur
The British Museum, London
www.britishmuseum.org

27 June   2009
Conference on the Hallaton Treasure
University of Leicester
www.leics.gov.uk/harboroughmuseum