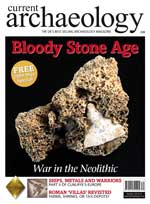 The time has come for our 2009 edition of the annual Digs supplement.   We’ve provided all the information you need to get out in the field this season – for reviews of last year’s digs, please visit our companion website at www.ilovethepast.com.
Villas, villas and more villas! This month, we offer two articles on this most Roman of topics; both question whether the collective categorisation of ‘villa’ is really accurate for the plethora of intriguing Romano-British rural sites.   We then step backward in time to examine new research from the Neolithic; was prehistory as peaceful as previously thought? Evidence of violence suggests that the Stone Age was very bloody indeed. Finally, we have our second installment of a three-part series based on Barry Cunliffe’s comprehensive study of the archaeology of Europe – Europe Between the Oceans.

Bloody Stone Age
The perception that much of prehistory was peaceful is changing.   Martin Smith’s new research looks at war and violence in the Neolithic.

The Land Between the Oceans: Part 2
We continue our mini-series examining Barry Cunliffe’s new book: during the period c.2800-140 BC, control of land, trade routes, shipping lines and the flow of luxury goods is central to Cunliffe’s vision of Europe’s evolution.
Roman Villas in Britain
We think of villas as the grand farmhouses of the Roman countryside. However, Bryn Walters has taken a fresh look at the evidence: could some of these ‘villas’ be temples, shrines or even tax-depots?

Roman Wrawby
The 2009   Current Archaeology Jeffrey May Award   winner details the work of the Wrawby History Group in excavating a villa – or is it? Sue Beasley wonders if it might just be a farmstead with pretensions.
Annual Digs Supplement 2009
Current Archaeology continues its tradition of providing the ‘who, what, when, where and how’ for volunteer archaeological digs, field schools and other fieldwork opportunities in Britain. For reviews of last year’s digs, visit www.ilovethepast.com

Reviews
Designs upon the land: elite landscapes of the Middle Ages;

Blood and Mistletoe: The history of the Druids in Britain.

Previous Rewriting the Age of Arthur: the Dark Ages brought to light Next Bloody Stone Age: war in the Neolithic