Perhaps the biggest disruption in the  Hebrides was the advent of the Vikings. But what remained of them and what trace did they leave in the archaeological record? The most remarkable discovery was what appeared to be a Viking fort. 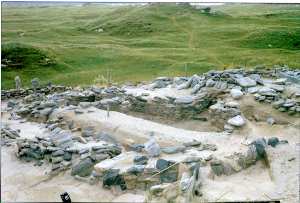 Medieval longhouse excavated in 1966, at the beginning of the excavation Note the central baulk, and the opposed doorways.

How should we study a landscape? We need to begin with total familiarity with every available source. We then need to find the opportunity for a major excavation with maximum depth, and then strip it painstakingly layer by layer – Research with a Capital R – not mere rescue.   An outstanding example of this has been Iain Crawford’s work in North Uist, and particularly at the Udal. Iain Crawford read first history and then archaeology at Cambridge in the 1950s. When he was appointed to the School of Scottish Studies in Edinburgh, he resolved to study the Western Isles. He started by reading Celtic, assessing the documents and place-names, and using this background to carry out field survey for settlement survivals. 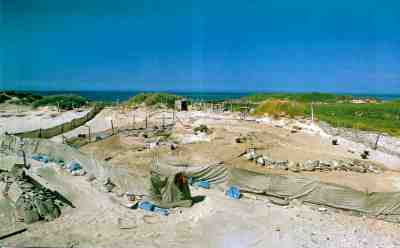 Excavating the Viking settlement The Mount has been entirely removed, leaving only the surrounding footings.

The recorded history of North Uist begins in 1469 when James II of Scotland gave a charter to the MacDonalds of Sleat granting them possession of North Uist, from which the Udal can be identified. The Udal was abandoned following the sandblows of the 1690s, but when the sand was removed, the village abandoned in 1690’s that was revealed. A coin of Charles II, a turner or twopence issued in 1663-8 marks the end of the habitation. The Udal was a more important village than most, for it was a tacksman’s township, the township where the tacksman lived. The tacksman was the squire of the social structure in the Western Isles in the Middle Ages: he was the person who collected the rents, typically controlling around 10 townships and himself paying an often nominal rent to the chief, the ultimate owner.

Perhaps the biggest disruption in the Western Isles was the advent of the Vikings. But what remained of them and what trace did they leave in the archaeological record? The most remarkable discovery was what appeared to be a Viking fort. 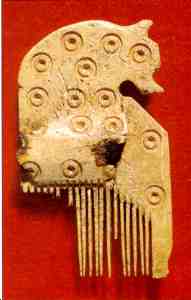 A Bone comb of the Viking age

At the North-Eastern end of the site there was a higher portion known to the excavators as the Mount. There is no building inside in the Viking enclosure, but it appears to have been the first thing built by the Vikings when they arrived. The Viking buildings outside the fort were mainly constructed of turf. This is a technique brought from home, but it is entirely unsuitable for the machair as it degrades very rapidly to a very distinctive colour, a purple mauve, and whenever the team found this colour, they knew they were in the Viking levels. 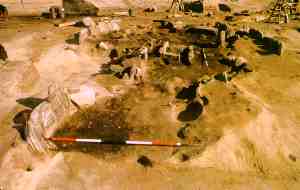 A ‘Jellybaby’ or figure-of-eight house. The inner room forming the head is in the foreground, possibly a sleeping area 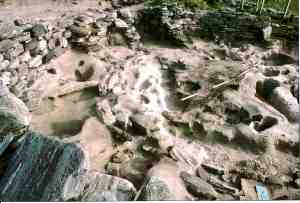 The central wheelhouse, here fully excavated. Note the entrance at the top.

Beneath the Vikings was a settlement of ‘Jelly baby houses’. This at any rate is how archaeologists have been chatting about them, though the official form appears to be ‘figure of eight’ or ‘ventral’ houses. The outline is just like jelly baby sweeties, that is an oval body with a head at the top, and a wide splayed entrance looking just like jelly baby legs. This is a very pop image of what was a dramatically new style of architecture when first discovered near Buckquoy in Orkney slightly earlier. It consists of an oval shaped house, a prominent wide entrance, a small head on the opposite side, a rectangular central hearth, and two platforms – possibly beds – on either side. The floor was a black mass of organic material and peat ash, but the platforms were cleaner, suggesting that they had been covered, perhaps for beds. The type runs through from AD 300/400 down to the coming of the Vikings in around AD 800. Five houses in all were located, stratified below the Viking settlement.

The Udal Prehistory: The South Tell 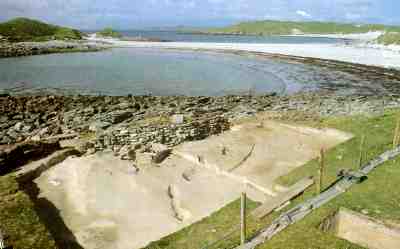 The great tide on 8th January 1974 nearly destroyed the site. Here the Bronze Age barrow has been nearly fully excavated, though the cist still survives at the centre.

With the excavation of the cemetery, the excavations, which had begun in 1963, finally reached virgin ground. However this was by no means the end of the story, for only 100 yards away was a second mound, the south tell, which took the story back yet further. In 1980 work began on this southern tell. The excavations have revealed three wheelhouses, the major structures of the Iron Age in the Western Isles; though as none of them has a hearth, the excavator does just wonder whether they were not dwellings, but more like temples. Wheel- houses come in two sizes – 11 piered and 8 piered, and this was one of the larger type, and the central one of the three. Opposite the central pier is a jet black slim vertical stone orthostat of notably phallic aspect. If the wheelhouse is to be interpreted as a temple, then this satellite building is either a secondary chapel or perhaps even the holy of holies.

In 1974 the planned excavation programme was interrupted when a freak perihelion tide played havoc in the Western Isles; on January 8th the tide came right over the machairs and into the townships. The Udal was flooded, and a mound down by the shore was partially scoured away by the retreating water, revealing a deep archaeological stratification. At the top, phase A was 19th and 20th century. A deep long trench went right across the tell, cutting through all earlier levels. This was a sawpit for sawing up boat wrecks – a common activity in the late 19th and early 20th century. It was dated by a collar stud found in the bottom. Following this industrial archaeology, phase B is a Bronze Age cairn with a central cist. The cist contained a very fine skeleton (being alkaline the machair preserves bone very well) but no grave goods

Between the Neolithic and the Bronze ages came one of the most momentous events in the landscape history of the Western Isles, the development of the shell based sand known as the machair. What is machair? It is Gaelic for plain – but it has come to mean in English the shell sand shore plains of the Western isles.It is formed from ground up sea shells which, being calcium rich makes it highly fertile. The formation of machair is controversial, but it is surprisingly recent – it appears to have originated at the end of the last glaciation, and it has been moving eastwards (inland) and uphill ever since in response to rising sea levels. At the Udal, the Beaker phase is the first horizon to have been formed on the machair. Below this was the Neolithic, on a black earth that is pre- or proto-machair. This neolithic phase (D) consists of houses of the Skara Brae type. The Udal is a magic place, today totally isolated, sitting on its peninsula far from any road or track, approached only by walking over miles of the springy machair, saturated with buttercups and daisies. It is only the excavator’s encampment, hidden in the dunes, that marks the site of the settlement. But over the last 33 years, Iain Crawford has followed through his remarkable research design, and produced a long history of change and adaption that is unique in the Western Isles, – and perhaps anywhere else in the world.

This is based on a fuller account in Current Archaeology 147