The great Iron Age hoards discovered at Snettisham in Norfolk form the richest Iron Age treasure ever discovered in this country. 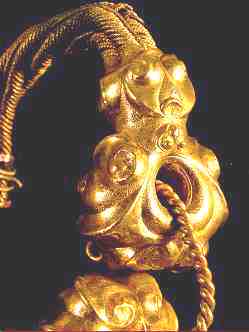 The ‘Marriage Torc’ from Snettisham. The upper part of the terminal of this gold torc shows a stylised human face. Does the main terminal represent a symbolic belly with the gold ring representing the umbilical cord that attaches to the other terminal?

The Snettisham treasure was first discovered in 1948. The field was being ploughed deeper than usual, and in the course of ploughing the ploughman discovered an interesting lump of metal. He took it to the foreman and asked him what it was. The foreman pronounced it to be part of a brass bedstead: and thus a gold torque – now one of the finest treasures in the Norwich Museum – lay for a week by the side of the field. Then more fragments of metal turned up and a local businessman recognised it as an antiquity, and took it to Norwich Museum where the keeper, Rainbird Clark, confirmed its importance. They returned to the field and the brass bedstead was recognised as being a gold torque.

Excavations were carried out in the vicinity and the sites of the hoards were discovered, shallow pits, numbered A B and C. From now onwards, every time the field was ploughed the ploughman was on the lookout for discoveries. Finds were made in 1950, 1964, 1968 and 1973.

By this time it was assumed that everything that was to be found had already been ploughed up, and there was nothing more left to discover. Thus when Squadron Leader Hodder in 1989 sought permission from the estate to use his metal detector in the field, permission was readily granted. At first he found little, though there were traces of metal fragments and one or two gold coins. However on 25th August 1990 he struck lucky. It was the Friday of the Bank Holiday Weekend, and he found something very interesting. Finding that the archaeologists were not present at the unit over the weekend and fearing that he should not leave his hole open, he decided to uncover it himself. It turned out to be a large pile of scrap metal all in a bronze container.

This suggested that there might be further hoards in the field, below the level of the plough, but vulnerable to the new power of the metal detector. The British Museum were called in, and Dr Ian Stead launched intensive excavations which have revealed five further hoards, have more than doubled the number of finds .

Mr Hodder s hoard is labelled hoard F. This was unusual in that it was a scrap hoard, that is a hoard of objects collected waiting to be re-cycled in the melting pot. But the next five hoards were repository hoards, in which treasures had been deposited for safe-keeping.

The big surprise was that three of the pits were double pits with two compartments one on top of the other. It seemed almost as if this was an anti-treasure hunter device designed so that a looter who found the upper pit would not think of digging down for the lower pit underneath. The objects were placed in a very definite order, for in each case the most precious torque was at the top of the lower installment.

By this time the British Museum team had cleared nearly quarter of an acre by hand down to the natural. They had been hoping to find evidence for Iron Age activity, but all they found – apart from the hoards – were the bottoms of half a dozen Neolithic pits. They therefore decided to use a box scraper to remove the plough soil over a somewhat larger area.

Finally, on the last day of the excavation, they hit gold, literally. This was Hoard L. The upper compartment consisted of a small nest of 7 silver and bronze torques. Then in a corner of the shallow pit, there was an opening to a larger pit which had the richest treasure of all. There were 2 bronze bracelets at the top, then two silver torques and finally ten gold torques: it was an unforgettable sight. 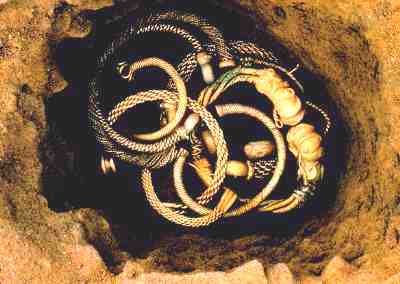 The most fantastic excavation photo of all. Hoard L , twelve torcs, gleaming with gold and silver as they were found in a pit in the ground.

In the autumn of 1991 the BM team returned and set the box scraper to work, removing the plough soil from three further acres. However the least spectacular find proved to be the most important.

This was a great deposit of iron slag found in the filling of a ditch. A magnetometer survey set up to trace the ditch, and it is now apparent that it forms an enclosure, 20 acres in extent. A number of sherds of pottery were found in the primary silt dating to the late 1st century AD – Neronian/Flavian.

What was this enclosure? It is tempting to see it as being the enclosure of a temple, for the Romans sometimes erected temples over Iron age ritual sites. However there is no trace of an temple, nor is there any indication of the offerings which would normally be made.

What of the hoards themselves? They comprise essentially three elements: torques, coins, and metal ingots in the form of bars which had been bent in order to form bracelets. In all there was a total weight of 30 kgms, much of it gold and silver.

The prize elements of the hoards were the torques (or torcs), that is twisted strands of metal worn round the neck which served in some parts of the Celtic world as the equivalent of the coronets of the Middle Ages. Some 175 torques were found in all, 75 more or less complete, and fragments of 100 more. 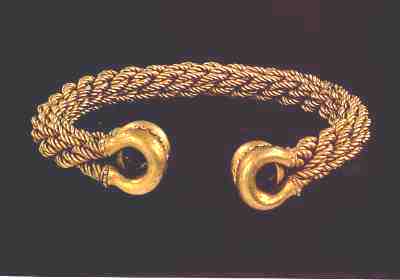 This superb gold torc is made of multiple strands, though it has simple loop terminals. It had been wedged into the pit, but when it was removed, it immediately sprang back into shape, after 2,000 years.

Most of the torques were of the twisted variety: the majority consisted of two or three bars twisted together. There have also been nine torques of an entirely different type, the so-called tubular torques. These were not made out of a twisted body at all, but from a hollow cylinder which was then bent round to form a hollow torque. These were often highly decorated: one of the finest torques found in 1948 was a tubular torque, and one of the most interesting torques found in 1990 was also a tubular torque.

The condition of the torques varied. Some were in good condition, as if this was indeed a treasury . However many were old and broken, suggesting this was a workshop hoard.

The best evidence for the dating of the hoards comes from the coins, of which there were some 234 in all: indeed five of the hoards contained coins. They are all Celtic coins, of the early, uninscribed variety, the majority being Gallo-Belgic imports, as well as some early British types. These early Gallo-Belgic are dated to around 70 BC, which is rather earlier than the previous dating. 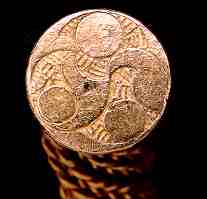 This is a simple buffer terminal, but it is decorated with the finest Celtic artistry.

When the first hoards were discovered in 1948 it was assumed that this was a hoard from the south-east of the country buried by refugees fleeing from Caesar and was therefore dated to 55/54
BC; this date was then applied to the coins. However these Gallo-Belgic coins are also found in France, where the coins of the date of Caesar s invasion are now becoming well-known. However these Gallo-Belgic C coins are earlier, and must therefore date to around 70 BC. This means that the Snettisham treasure cannot be a refugee hoard from the time of Caesar.

The Snettisham treasure remains a mystery. There is no sign of any contemporary settlement: the only indication that the site may have been significant is the presence of the huge enclosure for which the only dating is some 150 years later. These were was clearly not flight hoards: we must accept that they are local work and represent local taste and standards. Is this a prehistoric treasury – perhaps the royal treasury of the ruling house of the Iceni or their predecessors in this part of the world? Whatever it may be, it emphasises the surprising wealth of this part of the world in the Iron Age.

Photos by courtesy of the British Museum

This is a shortened version of an article originally published in Current Archaeology 126 and 135, which also has additional photos and plans.