A large Bronze Age boat has recently been discovered at Dover.

In 1991, a major new road was constructed through Dover. At the same time, much of the town’s Victorian Sewage system was replaced, cutting through most of the maritime quarters of the old town.

English Heritage therefore funded the Canterbury Archaeological Trust (C A T) to work on the project in June 1991. A small, mobile team from the Trust has now been busy in Dover for well over a year, when at lunch-time on Monday 28th September (the 345th day of continuous fieldwork) a team member spotted a group of substantial timbers in the bottom of a deep contractor’s pit at the junction of Bench Street and Townwall Street, some 6 metres below ground level and just below Ordnance Datum. A rapid inspection indicated that these timbers formed part of a boat; moreover, the use of twisted withies within its construction, and the associated tufa and peats, suggested that the vessel could be prehistoric. Following a meeting with the consulting engineers, Mott Macdonald, and their main contractor, Norwest Holst, the remainder of the day was allowed to assess more fully the extent and preservation of the vessel. It was soon obvious that the lower portion of the boat was intact. 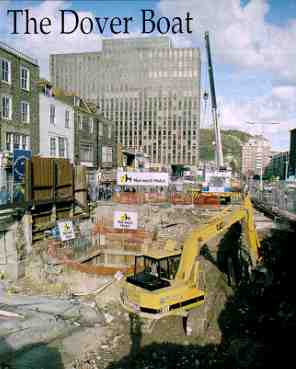 The main road through Dover is being widened, and the sewers are being rebuilt. Here, behind the coffer dam in the foreground, the Bronze Age boat is being excavated.

The initial investigations revealed that the timbers extended for some 6 metres across the full width of the pit and it became clear that we were dealing with the substantially complete mid-section of a very well preserved prehistoric plank-sewn boat, broadly similar to that found at North Ferriby before the last war, and obviously a crucial new find for nautical archaeology.

Numerous telephone calls and meetings the following day culminated in the grant of 6 days to excavate and record the remains. The ever-helpful engineers had already checked and indicated that unfortunately the levels could not be raised in order to preserve the boat in situ.

Since the boat would have to be removed to allow the contractors to excavate even deeper to complete their work, it was decided that the boat had to be lifted. A team of experts was hastily assembled to decide how this could be achieved. The main problem was whether to attempt the lift in one, or whether to cut the boat into sections and lift these individually. Opinions were divided, and remain so. However, time was short, the remains were fragile, and had already been damaged, so it was generally agreed that it would be safest to cut the boat into manageable segments thereby safeguarding key structural features.

Work on the boat continued for 13 hours each day, and by the Friday night all the recording had been completed ready for the lift on Saturday. Working in conjunction with English Heritage conservators, the boat was then cut into 10 lettered sections, each being maneuvered onto a pallet and then removed from the excavation using a crane and lorry kindly supplied by Dover Harbour Board. At 5.50 pm on Saturday 3rd October, the almost exhausted excavation team gave the signal to raise the final section of the boat which was taken, by lorry, to join the other sections now resting in a large water tank previously prepared by the Harbour Board in one of its store buildings on the quay-side only a short distance away.

The lifting operation were watched by a large crowd of Dovorians, eager to see the remains of the ancient vessel, so appropriately discovered at one of the Europe’s most famous ports. The atmosphere was somewhat akin to the homecoming of the Mary Rose to Portsmouth! 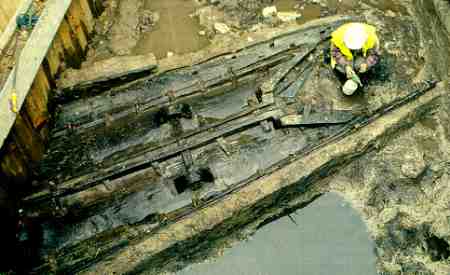 The Dover Boat: the excavation was extended to reveal the southern end of the boat. Note the pair of ‘rails’ running down the centre, and forking at the right to form the ‘Y-shaped’ end of the boat. The two rails are each on a different plank and hold the cross-timbers that fasten the two planks together.

During the following week the contractors resumed their construction work whilst the archaeological field-team correlated their somewhat hastily prepared notes and drawings. It was clear that further substantial sections of the vessel must lie to the north and south of the mid-section already lifted. Although these sections were beyond the limits of the contractor’s excavations, we were worried about the new deep subway and particularly by the effects of the associated water pumping station on the surrounding water table. If the remaining parts of the vessel were left in situ for future generations, would the sediments remain sufficiently waterlogged to allow the boat timbers to be preserved? Instructions were therefore issued by the Department of Transport and English Heritage to attempt to lift the remaining portions of the boat.

The reward for the considerable amount of extra effort and cost put into the new excavation was the exposure of a further 3.5 metres of the craft including the remains of an original end – it is not clear whether this represents the bow or stern. Interestingly, this had been partially dismantled soon after the boat was abandoned. A large section of the structure had been cut away, leaving intact the feathered ends of the side planks and the rather strange-looking forked terminal of the central base rails.

The same procedure was agreed for the lifting of the second section of the boat and this was undertaken on Monday 19th October in heavy rain, the final segment being retrieved at 8.45pm. A total of 9.50 metres of the boat has now been raised in all, which perhaps amounts to about one half to two-thirds of the total length. Once conserved, it is hoped that the boat will be placed on permanent display at the new Dover Museum. The Dover boat is obviously to be compared to the boats found at South Ferriby in the muds of the River Humber in 1939 and again in 1946 by Ted Wright. Both are sewn boats, that is boats where the planks were fastened together by withies in a form of sewing. However, though the techniques were similar, the style of architecture was different. The Ferriby boats consisted essentially of three planks which formed the bottom of the boat, a long central keel plank and two outer bottom planks.

By contrast, the Dover boat had four bottom planks, the long central plank being replaced by two planks. These were held together with the help of the ‘rails’ that form the most prominent parts of the photographs running along the length of the boat. 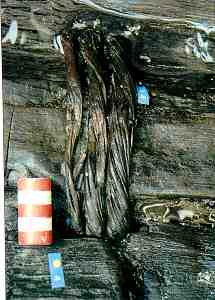 How the boat was held together.

There seems little doubt that the craft represents a sea-going vessel which presumably made regular trips across the Dover Straits to and from the Continent. Initial C14 dates indicate that the boat is of Middle Bronze Age date. The craft must have been the product of a master boat-builder working within a long established tradition: the workmanship was superb.

Preliminary examination suggests that the boat was old and had been deliberately abandoned. However it was not abandoned on the sea-shore, but had been dragged up a freshwater creek.

The raising of the Dover boat proved to be a splendid example of co-operation and assistance by many different companies, official bodies and individuals. Substantial financial assistance was provided by English Heritage and the Department of Transport, whilst the engineers of Mott Macdonald and Norwest Holst gave invaluable practical help and encouragement on site. Dover Harbour Board played a vital part in the actual lifting and storage of the vessel, whilst Dover Museum and Dover District Council provided essential back-up to the excavation team. The writers extend their sincere thanks to all concerned.

This is a shortened version of an article originally published in Current Archaeology 133, which also has additional photos and plans.