Hillforts occur in great numbers in West Wales. These are often smaller than the great hillforts of southern England, but there are many more of them.

The best-known, and the most extensively excavated, is Castell Henllys, where Harold Mytum has not only excavated most of the interior but also reconstructed several of the buildings within the hillfort.

Castell Henllys is situated in south-west Wales, not far from Eglwsywrw (pronounced Egglee Sooroo), where it is part of the Pembrokeshire Coast National park, where there is a Visitors Centre, open from Easter to October. 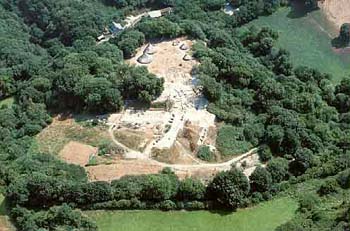 Castell Henllys is a promontory fort, projecting out into the valley. Here the high ground is at the bottom, and the surrounding defences are hidden in the trees. The reconstructed round houses can be seen in the interior of the fort, while at the top is the modern farmhouse, where the visitor centre is now situated. 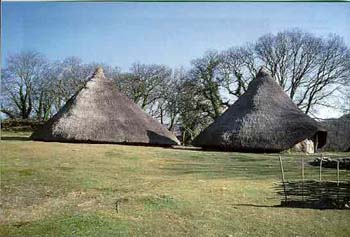 One of the characteristics of the British Iron Age is that the typical dwelling was not a rectangular, but round, and here we see two reconstructed round houses, both re-erected on the original sites

Plan of the hillfort

The hillfort is surrounded by steep precipices on the sides, with the only approach from the north west, which is where the main defences are. The interior of the hillfort was crowded with roundhouses, though normally only part of the ring slot that marks the position of the houses still survives.

Outside the hillfort defences to the north was a Romano-British farmstead. 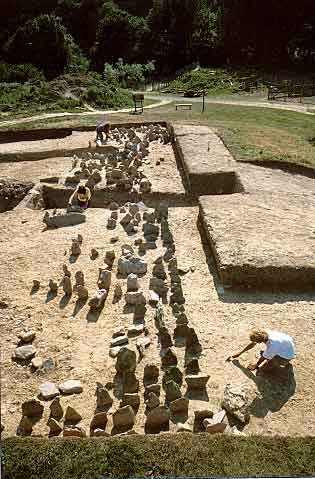 How do you stop an Iron Age chariot charge? Well, a tank trap helps, and these rows of stones, set outside the main defences of the hillfort, were probably intended as a defenmce against chariots. Similar rows of stones called a ‘chevaux-de-frise’ have been discovered outside hillforts in Spain.

They were preserved when they were buried under a later rampart, and were only discovered when the rampart was removed by the archaeologists.

This is based on a fuller account in Current Archaeology 161, published in February 1999