A rich burial dating to within 20 years after the Roman conquest has just been excavated in a gravel quarry at Stanway, just outside Colchester.

After the Roman conquest, some of the native princes did rather well.

Before the Romans came, Colchester was the ‘capital’ of Britain – the nearest that there was to a proper town. This was situated at Gosbecks, just outside modern Colchester. When the Romans came, they built a new town, but kept the old centre and built a theatre and temple there.

And on the outskirts of this pre-Roman town, a splendid series of graves has recently been discovered.

Five enclosures have been discovered, each presumably the burial ground of one of the native princes. Unfortunately the main graves have all been robbed,   but around the princes, some of the lesser functionaries were buried. One of these graves has been discovered – that of a doctor, which gives some idea of what the burial ceremony must have been like. 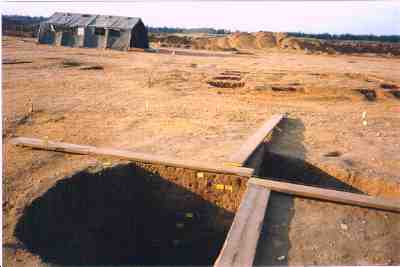 View down into the burial pit

The intact burial was not at the centre of the enclosure, but was a subsidiary burial. Here in the foreground is the central pit, which probably originally contained   the burial of the prince. Unfortunately however it had been robbed, or the grave goods had all been cremated. The intact burial of the ‘doctor’ is in the background, under the tent. 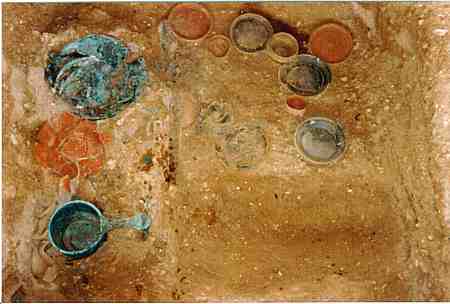 Close up of the top half of the pit

The finds were made in two wooden boxes. To the top left is a wooden box containing drinking equipment including a bronze saucepan and a bronze strainer. Top right, outside the box, is a dinner set. 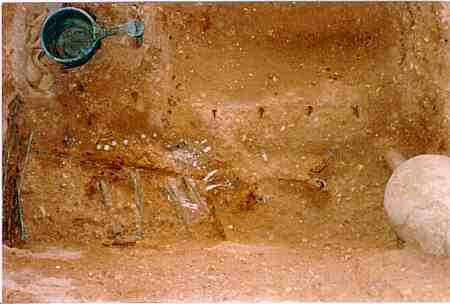 Bottom right is an amphora, a large pottery vessel containing wine. Along the bottom of the pit is a second box containing a gaming board.

To the left, in a wooden box, is drinking equipment. At the top is a bronze strainer, crushed. Then there is a large Samian bowl, also crushed, and then a patera, or bronze saucepan, in perfect condition. The edges of the box were visible in the ground, and may perhaps be visible on screen, with a certain amount of imagination.

To the right, outside the box, is a dinner set. This consists partly of terra rubra, in red, and terra nigra, in black. These items can be dated fairly precisely to around 50 AD, that is approximately 10 years after the Roman conquest in 43 AD.

The southern end contained a second wooden box, which contained the gaming board which as become the best known feature of the burial.

Little can be seen of the gaming board itself in this picture – though the row of white glass gaming pieces along the top should be visible – the comparable row of blue glass beads along the bottom have probably not survived transmission. However the gaming board was about two feet long by a foot wide, and it was hinged down the middle – again the hinges are not really visible. However it was hinged longways rather than crossways, so that it would have folded up to about 2 feet long by only 6 inches wide.

The most interesting feature however is the series of bronze and iron rods which were placed over the top of the board. Some of these are visible. The group on the left has a spatula at one end, and a trumpet flare at the other end. Some of those in the centre have a right-angled bend at the top. These are almost certainly medical implements, suggesting that the person buried had been a doctor. 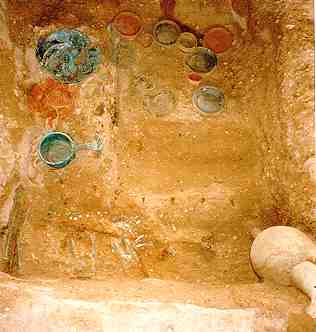 The southern end of the burial pit.

To the right the pottery amphora can be seen. These normally hold wine: however this is a Spanish amphora of a type that usually holds fish-sauce: did the person buried (the cremated ashes were found to one side of the grave) go to the next world with wine? Or with fish-sauce?

Plan of the Stanway burial enclosures.

This plan, taken from an earlier article in Current Archaeology 132, shows the layout of the burial enclosures. The site lies on the western outskirts of Gosbecks, the Iron Age ‘town’ that formed the predecessor to Roman and modern Colchester, which lies 2 miles to the north.

Air photographs revealed this series of rectangular enclosures which were thought to be agricultural until excavation showed then to be burial enclosures, with a principal burial pit at the centre – mostly empty – and subsidiary pits within the enclosure. The current excavations took place in enclosure 5, at the right hand end of the top row.

The excavations were conducted by the Colchester Archaeological Trust, under the direction of Philip Crummy.

For fuller details, see the articles in Current Archaeology 132 and 153