The largest hoard of Anglo Saxon gold ever found, was discovered this summer by a metal-detectorist in a field in Staffordshire and is set to revolutionise our perceptions of life in the 7th and 8th centuries. With more than 650 items made from gold, and more than 500 in silver this is truly a king’s ransom! 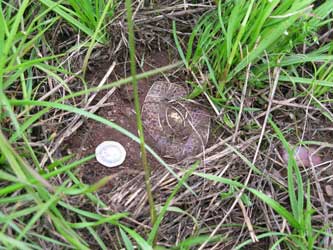 Metal detectorist, Terry Herbert, discovered the find most metal detectorists can only dream of, on arable ground in early July this year. Realising its significance, he immediately contacted Duncan Slarke of the Portable Antiquities Scheme’s Finds Liason Officer for Staffordshire and the West Midlands.

X-ray examination of the clay blocks revealed some amazing indications of fragments decorated with filigree, some decorated with cloisonné garnets and many pieces of crumpled sheet metal some of which could be idenitifieds as sword hilt plates along with rivets from the hilts.

A formal dig was arranged and a team of archaeologists from Birmingham Archaeology excavated the site for a month from end of July through August this year with Kevin Leahy, National Advisor to the Portable Antiquities Scheme, reporting on the finds. The results were breathtaking. 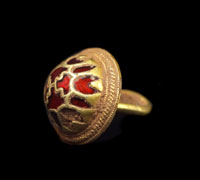 The hoard had been carefully stashed away, in ground unlikely to be disturbed as there are no indications of burial, settlements, or other structures. Maybe the owner hid it from imminent danger, intending to retrieve it later, or maybe it was a ritual offering.   What is extra ordinary is the apparently deliberate destruction of the valuable items before they were buried, as if ritually put out of action or sacrificed. Could this be the trophy hoard of a wealthy warrior king?

Intricately carved with elaborate Anglo-Saxon art styles, some with fine garnet cloisonné , the hoard is not only dazzling but highly intriguing.   Most of the objects appear to have been deliberately broken prior to burial and, still more surprisingly, there were no brooches or pendants, no feminine dress fittings; moreover, there were none of the triangular three-rivet gold buckles or any belt fittings so often found in male graves of this period. 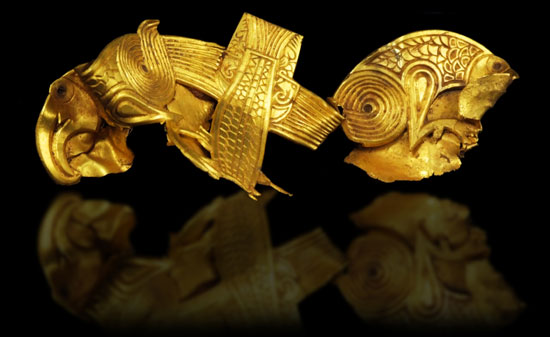 Most of the hoard is comprised of sword hilts – a hugely symbolic item in the Anglo Saxon period, representing wealth and, more importantly, status.   Taking an enemy’s sword hilt would have been a highly prized trophy, and it is the hilt, rather than the blade, that would have been retained and displayed by the triumphant victor. 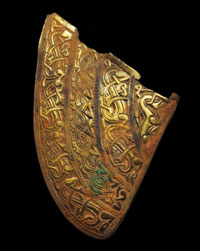 Fragments from these hilts include pommels, 68 of which are gold, 11 silver and five are copper alloy or base silver;   some of the hilt plates were decorated with cabochon garnets.

There are a number of gold plates, some of which are from scabbards, but some are believed to be from helmets, including a possible cheek piece covered with intricate carvings of twisted and intertwined beasts. The best known example of a helmet from this period is the reconstructed helmet from the famous Sutton Hoo boat burial, discovered 70 years ago.   But there is much controversy as to how they actually looked – even the Sutton Hoo example now on show is the second version, the first having been painstakingly taken apart before being reconstructed again. Archaeololgists believe these new finds will add greatly to our understanding of helmets from the Anglo Saxon period. 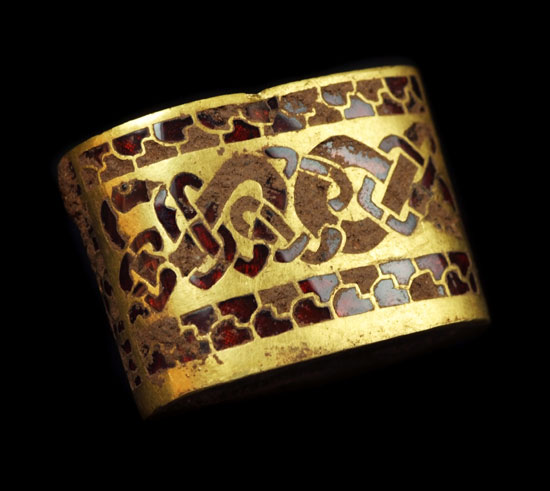 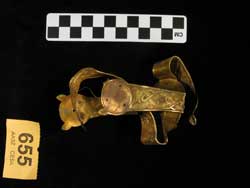 Significant in the hoard is the discovery of two ( maybe three) gold Christian crosses and a ribbon of gold with a Biblical inscription, the only non-martial finds to be unearthed.

One of the crosses is a pendant cross designed to be worn and looks similar to the lost Thurnham cross form near Maidstone in Kent and to the cross buried with St Cuthbert ( died AD 687) – although this cross is decorated with filigree rather than cloisonné garnets like the St Cuthbert’s cross. The second cross is larger, either an altar or processional cross, and has been folded before burial.

The band of inscribed gold is particuarly fascinating and may be important in identifying a date for the hoard: the inscription, on both sides, is in Latin text reading:
surge d[omi]ne [et] dispentur inimici tui et fugent qui oderunt te a facie tua

rise up, o Lord, and may thy enemies be scattered and those who hate thee be driven from thy face

and is taken from two similar texts either from Psalm 67, 2 or from the the Old Testament Numbers 10, 35: ‘When he had lifted up the ark, Moses said “Rise up, Lord, and may your enemies be dispersed and those who hate you be driven from your face”. 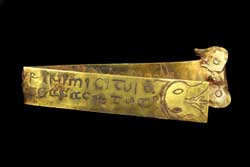 The discovery of the hoard in Staffordshire is interesting, for Staffordshire was near the heart of the Anglo-Saxon kingdom of Mercia.

There were three major Anglo-Saxon kingdoms: Wessex, Northumbria, and Mercia.   Mercia is the least known of these, but in the 8th century, it was perhaps the more powerful.   It first became noticed under King Penda (626 to 655) but it came to the forefront under King Aethelbald (716 to 757) who, because of his prowess as a military leader, acquired the title Bretwalda, or King of Kings.   He was succeeded by Offa (757 to 796) who was the greatest of the Mercian kings and who extended their power still further, even down as far as London. The hoard is probably to be dated before the accession of Offa: would his predecessor Aethelbald have recognized some of the hilts?

This comes from Current Archaeology 236, which contains the definitive guide to the Staffordshire Hoard.

Previous Morris and the Prince – and much more Next Aberdeen University