The End of Roman Verulamium 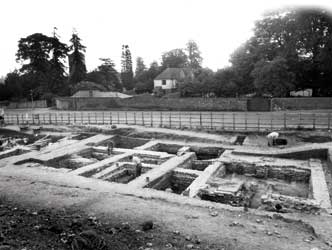 It was one building in particular that changed everyone’s thinking. Part explored in 1956, it was further investigated in 1957, 1959, and 1960, by which time Frere’s excavators had recovered a fairly complete plan of a large aristocratic town-house at the centre of Roman Verulamium. This building — Building 2 in Insula XXVII — comprised at least 22 rooms opening onto a colonnaded corridor ranged around three sides of a courtyard or garden. Three rooms had polychrome mosaic floors, one of which, probably a dining-room (triclinium), included a central figure associated with grapes and wine-cups (canthari) — presumably Bacchus. 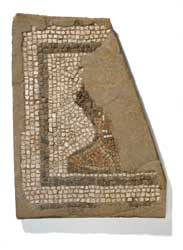 Building XXVII.2 was exceptionally grand, but what made it something of an archaeological sensation at the time of excavation was its apparent date. Frere believed, on the basis of coin evidence, that it had been constructed shortly after c. AD 380. Moreover, after a period of use, two small extensions were added, with mosaics laid in them. One of these was in use long enough to require patching. Then, it seemed, flues were cut through the floor, for what was interpreted at the time as a corn-drying oven. This in turn was in use long enough for the stoke-hole to require repair. Subsequently, the whole structure was demolished, and over the levelled remains a large rectangular building, probably a barn, was constructed. When, finally, this was demolished, a Roman-style water-pipe formed of hollowed-out trunks joined with iron collars was laid across the site.

None of these phases, except the first, could be directly dated. On the other hand, there was no build-up of material between them, implying a continuous sequence without any period of abandonment after the initial construction of the grand house shortly after c. AD 380. Many decades of activity seemed to be represented. Frere suggested the corn-drying oven may have dated to approximately AD 430, and the water-pipe to at least 20 years later, c. AD 450,   ‘and maybe considerably later’. Here, it seemed, was incontrovertible evidence for the continuity of Roman urban life long into the 5th century AD. 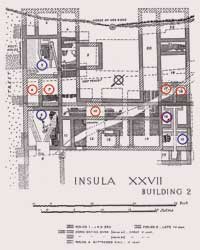 Sheppard Frere’s excavations, undertaken using students and volunteers over seven summer seasons in advance of planned road-widening, cut a swathe through the centre of the former Roman town. Earlier excavations, in the 1930s, had uncovered the remains of major public buildings in the immediate vicinity — the forum-basilica, the theatre, a major sanctuary, a market-hall — and also a large part of an elite residential area towards the south-eastern edge of the town. The latter excavation, led by Mortimer and Tessa Wheeler, was as famous in its day as that of Frere a quarter of a century later. The results had had a similar impact — changing radically perceptions not only of Roman Verulamium, but of Roman Britain as a whole.

The many grand houses uncovered by the Wheelers represented a great construction boom beginning in the mid-2nd century AD. But, later 3rd century decline was so dramatic that, in Wheeler’s view, ‘Verulamium must at this time have borne some resemblance to a bombarded city’. Though there was some recovery in the early 4th century — the so-called ‘Constantian renaissance’ — this was little more than a blip before further decline, which saw a fast-dwindling population huddled together in an impoverished central zone, while ‘the spacious residential quarter in the southern part of the town decayed rapidly to slum conditions or even desolation’.

R G Collingwood’s image of urban decline was even more lurid in his 1936 history of Roman Britain. In the later 4th century AD, ‘the greater part of Verulam was uninhabited, a waste of empty land and ruined houses. Here and there squatters lived among the ruins. The theatre had become a rubbish tip, and its orchestra and auditorium were silted up beneath foot upon foot of domestic refuse. Close round it, a shrunken and impoverished population lived in slum conditions.’
No doubt, the dark picture painted by Wheeler and Collingwood was informed in part by their own turbulent times. Wheeler had fought on the Western Front and Collingwood was writing history in the depths of the Great Depression. 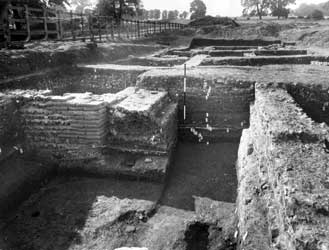 Equally, Frere’s far sunnier picture fitted the mood of the ‘never had it so good’ postwar boom. His rejection of the Wheeler/Collingwood perspective was explicit and uncompromising. ‘The famous theory that Verulamium c. 275 “must have borne some resemblance to a bombarded city” due to the decay of its public and private buildings and the lack of any constructional activity during the 3rd century is now known to be a myth … During the 4th century, prosperity was maintained; town houses were being built and provided with mosaics down to the end of the century, and during the 5th century several phases of structural activity have been identified.’