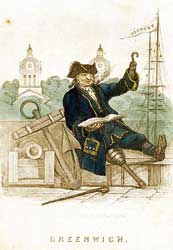 Royal Hospital Greenwich was the naval equivalent of the more famous Chelsea Hospital for army veterans. It was a retirement home for ‘seamen worn out or become decrepit by age and infirmities in the service of their country’. Among them were at least 93 men who fought at Trafalgar.

Most of the veterans associated with the hospital were ‘out-pensioners’ — they lived in the community, many had trades and families, and some lived as far away as Devon and Dublin. The usual pattern was for men to become ‘in-pensioners’ only in old age, and if they had no family to support them, spending the final five or ten years of their lives in the hospital. The exceptions were severely disabled men, some of whom are known to have been in residence for as long as 25 years. It was these in-pensioners who were buried in the hospital burial-ground. 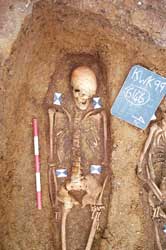 Historical documents record burials which occurred during the period 1749 and 1856 — making the deceased the naval veterans of wars with the Dutch, the Spanish, the Americans, and, of course, with the French Republic and Napoleon. An estimated 20,000 retired seamen and marines of the Royal Navy were interred on the site in this period.

The men interred in the burial-ground of Royal Hospital Greenwich were, as one naval historian has put it, ‘the picked, brine-pickled survivors of a gruelling existence from which weaklings soon faded’. Study of the excavated remains of 97 of them has confirmed that life below decks in Nelson’s navy was indeed a hard and dangerous one.