In 1970, writing in CA 21, architect-turned archaeologist Chris Musson estimated that there were perhaps 200 roundhouses known in archaeological literature. The result of recent work is that now, 30 years after Musson’s estimate, we can suggest that the number of excavated roundhouses in Britain must be rapidly approaching 4,000 – a staggering 20-fold increase in archaeological data. What can it tell us?

To start at the beginning, the roundhouse is found first in the later 3rd millennium BC in South-West Scotland. Attracted to the easily tilled soils, early Bronze Age people settled in upland landscapes and often built houses on platforms levelled into the hillside. By the end of the Bronze Age, house size had increased (to c.10m in diameter): the implication is that more people were, by that time, living together.  The number of houses being built increased substantially after c.400 BC – as shown in recent work by John Thomas of University of Leicester Archaeological Services – and we currently think that this indicates population increase. River-valley landscapes, in particular, saw much greater use, linked to new innovations in farming at this time.

The prehistoric roundhouse continued to be built throughout the Roman period, particularly in the north and west of Britain. Roman period roundhouses were usually made of stone and were often rather small (c.5m diameter). Whilst walls of large sunken timbers can support the roof-weight of rather large diameter roundhouses, stone is much less stable at greater diameters. The result is that, if building in stone, household space must become separated between different structures – in the Roman period we find that settlements consist of a number of small stone houses rather than one or two large timber ones. A rectilinear form, however, solves this design problem: a house can be extended length-ways to increase internal space, and in the south and east of England this became the more fashionable alternative, with the adoption of the Roman villa. 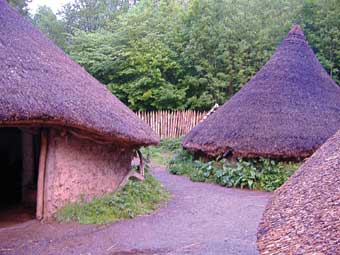 Roundhouses provide a huge amount of architectural variation, and many design choices relied on which materials were available to people in their immediate landscape setting. There are, however, some clear house types. Ring-banks of stone and turf are features of upland Bronze Age landscapes. Ring-ditch houses are a very long-lived northern British type. Clay-walled structures are a feature of river-valley landscapes in the later Iron Age, especially in eastern England, whilst in Atlantic Scotland, on the other hand, people well-used to working with stone built monumentally, creating the brochs.
Debunking roundhouse myths

The first timber roundhouse was  identified by Thomas Wake in his 1936 excavations at Witchy Neuk (Northumberland). Since then, the work of Gerhard Bersu in the late 1930s (CA 3) focused much effort on the large Early Iron Age roundhouses of Wessex. Bersu had been keen to find very large roundhouses – believing them to be the residences of migrating Iron Age chiefs – claiming a diameter of 25m for houses on the Isle of Man. In reality, even a 15m diameter house is very rare; the vast majority are between 4m and 14m, with the average at 8m – about the width of a 1930s semi. Despite their size being not quite what was once imagined, roundhouses remain a strong and sophisticated design, one very well-suited to a temperate climate. Since the work of Peggy Piggott in the 1940s, George Jobey in the 1960s-1970s, and Graeme Guilbert in the 1970s-1980s, roundhouse studies have really flourished. With my synthesis of published ground-plans, we now have a full understanding of the structural design of prehistoric roundhouses.

A traditional view of the roundhouse is that it may have stood for some centuries, akin to medieval half-timbered houses. When sunk in the ground, however, upright timbers suffer from vertical water uptake and post-end decay. It is only with the invention of the sill-beam – a horizontal timber which imposes a slower decay rate – that house life-spans increase. Experiments suggest that roundhouse structures might have survived for as much as 60 years, but it seems that most were abandoned well before this. Only one in four houses was repaired, and these tended to be Bronze Age structures in more seasonal landscapes – if houses are unused in winter, decay rates increase as structure and thatch cannot dry out. Generally, roundhouses were used for a single generation.

For a full account about life in a roundhouse have a look at  issue 222 of Current Archaeology. For an interactive dataset of all roundhouses in Wales, see Internet Archaeology Issue 23.