A very rare mammoth carving has been discovered on a wall in Cheddar Caves (Somerset, England). The 13,000 yearold  carving is being hailed as one of the most significant examples of prehistoric art ever found in Britain.

The relatively small image (a little larger than a man’s had), is only the second piece of representational cave art found in Britain.

Archaeologists have dated the engraving, which is hard to see because of erosion, to the Upper Palaeolithic period. What makes the new find all the more sensational is that unlike the abstract rock art previously found in the area, this image reveals the clear outline of a mammoth.

Though Britain had a busy Stone Age culture, no cave paintings or carvings had been found – unlike the famous examples in neighbouring France and Spain. Recently, the discovery of prehistoric carvings of animals and humans at Cresswell Crags (Current Archaeology 197), near Sheffield, and and of probable Mesolithic age on Mendip (CA 197 and 199) launched a new hunt for prehistoric cave art. 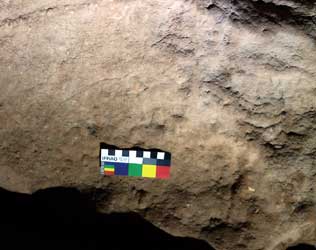 Graham Mullan and Linda Wilson, of Bristol University, have spent several years minutely examining various Cheddar Caves, using sophisticated new lighting techniques. Experts believe the carving, in an isolated niche, may have been used by tribal shamans in religious rituals, as it lies beyond the main living area of the Stone Age tribe who inhabited the cave. The creature’s huge tusks are the clearest feature.

Unfortunately, conditions in the Cheddar caves are not particularly conducive to the survival of Palaeolithic art. Much of the original rock surface was damaged or removed during the exploration of Gough’s Cave in the late 19th century and the remainder is still subject to frequent flooding. Experiments in 1999 demonstrated that pigment survival was unlikely, and calculations by geomorphologists showed that the rock surface itself was subject to water degradation However, despite these problems, Mullan and Wilson noted a feature which appeared to be a partially engraved figure of a mammoth. Careful recording was carried out by drawing, photography and laser scan, and a close examination led to the conclusion that the drawing is prehistoric. According to Jill Cook, Deputy Keeper in the British Museum’s Department of Prehistory and Europe: 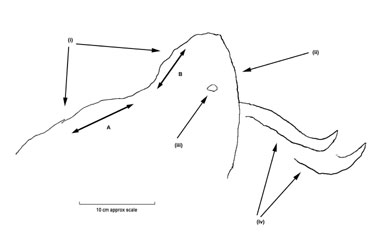 Left: a line drawing of the image shows interpretation of the natural and engraved parts. i) the line of the dome of the head and the back, ii) the face and trunk, iii) the eye and iv) the tusks. Sections indicated by the arrowed lines A and B most clearly show human workmanship. Drawing: Graham Mullan. Photo: Mullan, Andrew Atkinson, and Steve Cottle.

'Had I been shown this outline of a mammoth during a visit to one of the well known cave art sites in France or Spain, I would have nodded and been able to accept it in the context of other more obvious pictures. At Gough’s, or anywhere in England, it is not so easy. Cave art is so rare here that we must always question and test to make sure we are getting it right. Opinions on this may differ but we do seem to be looking at an area of ancient rock surface and the lines which appear to form the head and back of the mammoth could have been made by a stone tool. They are certainly different from natural markings on the cave wall.’

The figure has now been protected and displayed by the management at Cheddar Gorge and Caves and is now open for all to see. Graham Mullan and Linda Wilson hope to complete a survey of the remainder of the cave’s walls in the near future.

Previous Orkney's new Skara Brae Next Message in the Stones