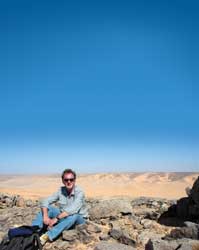 First World War trenches? Second World War air-raid shelters? Cold War bunkers? This is the stuff of modern conflict archaeology, but what can it teach us that we don’t already know about such thoroughly documented events as the great military confrontations of the 20th century? Bristol University is about to launch the first-ever degree course in modern conflict archaeology. A new specialism is taking off. But is it really archaeology? We spoke to leading advocate Dr Nick Saunders.

‘Yes, you can read about it in books,’ counters Nick Saunders, warming to a well-rehearsed argument. ‘But a book is a cold fish. An artefact is far more potent. It is something three-dimensional. It was made, used, lost, found, sold, revalued, bequeathed, heirloomed, by numerous people, at different times, all of them having a more or less visceral relationship with it.’

The point is that an artefact has a life history, a succession of roles and meanings, and is therefore packed with stories about the past. And this is true not just of portable objects, it applies to entire landscapes.

‘Landscape is itself an artefact — or a series of artefacts superimposed on each other. Landscapes are continually being ‘re-artefactualised’. Landscapes are dynamic and changing — and therefore, just like things you can hold in your hand, they are packed with stories about the past.’ 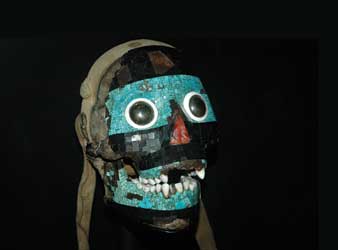 Traditional approaches — political history, military history, even social ‘history from below’ — are text-bound. The problem here is that documents are always written for a purpose, and they may therefore distort reality. ‘People take books as true, but often they are not,’ explains Saunders. ‘Objects are not only much more powerful; they are also, in a sense books can’t be, intrinsically true.’

Animal symbols
Nick Saunders is not a regular archaeologist. He has always combined archaeology with anthropology, and it is this mix that fuels his academic dynamism. Born in Southampton in 1953, Saunders spent most of his childhood in the city, except for two spells of about a year each in San Francisco and New York. He then studied prehistory and archaeology at Sheffield, where he was heavily influenced by a junior lecturer brought in from the States to teach anthropology to archaeology students. The two subjects have traditionally been linked in US universities, but this was innovatory in Britain at the time.

Saunders decided that archaeology and anthropology were two sides of a coin. ‘What we were trying to do as archaeologists was to develop understandings of the past in the same way that social anthropologists were trying to do for contemporary societies. It’s the famous Wheeler point about archaeology being “the driest dust that blows” unless you fill it with people.’ After Sheffield, therefore, he did a social anthropology M.Phil at Cambridge, followed by a year’s fieldwork in the remote mountain villages of southern Mexico. His subsequent Ph.D at Southampton then combined anthropology and archaeology in a study comparing animal symbolism in contemporary Amerindian societies with that in the Aztec and Classic Maya civilisations. The key discovery was that indigenous Amerindian societies used animal symbols to represent social relationships; in particular, animal predators were used symbolically to represent ‘predators’ in society. ‘I then applied these insights to the archaeological evidence, and there was a good fit — the Aztecs and the Maya were using animal symbols in the same way.’ The New World civilisations had a special appeal — ‘the attraction of the exotic’ — but they also represented academic opportunity. Few British archaeologists studied them, so Saunders was able to carve out a niche for himself in the early 1990s, teaching and developing new courses for Southampton University and the local Workers Educational Association. 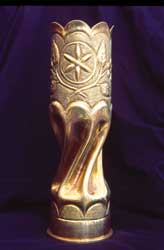 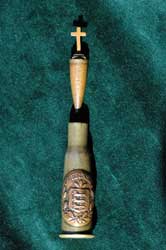 A second dimension to Saunder’s research opened up with his discovery of ‘trench art’. The deal he struck with his kids when they wanted to go to Disneyland Paris in 1996 was that he got to stop for a couple of hours on the battlefield of the Somme, where, 80 years before, his grandfather had fought in the trenches. ‘I walked across the battlefield not as a military historian but as an anthropologist, deploying ideas about landscape and spirituality. But when I got back home, I found that conflict archaeology did not exist.’

What did exist in relation to such sites was large-scale battlefield looting and a small amount of what is generally known as ‘battlefield archaeology’. Saunders is passionately insistent that the latter, though sometimes involving work by professional archaeologists, is not the same as ‘conflict archaeology’. Sometimes dubbed the ‘buttons and bullets’ approach, it is narrowly preoccupied with recording features and plotting artefact distributions as a sort of aid to conventional military history. It is concerned with who did what, where, and when.
Attitudes to trench art exposed the myopia and nerdishness of what was going on. Saunders’ mother reminded him of a trench-art object bequeathed by his grandfather. He put it on his desk for two months, thought about it, and wrote to various people. ‘The responses were always the same — it’s trench art, it’s ephemera, it’s junk, there’s nothing in it.’

Saunders realised that here was an entire category of objects that no-one had ever studied archaeologically or anthropologically. Yet trench art was produced and distributed in huge quantities, and, because of the traumatic events represented, it was rich in symbolism, packed with meaning, and super-charged with emotion. He defined trench art as ‘any object made by soldiers, prisoners of war, and civilians, from war matÃ©riel or any other material, as long as object and maker are associated in time and space with armed conflict or its consequences’. With a three-year research grant from an enlightened British Academy, Saunders set about a systematic study, working mainly on material from the First World War, a project culminating in a major monograph, Trench Art: materialities and memories of war (2003).

Trench art, he realised, was a concept, not just a group of objects associated with the First World War (or any war). As old as conflict itself, such artefacts embodied individual responses to war, shaped by culture, but sealing within themselves experiences and stories of life-and-death situations. The concept embraced everything from Istanbul’s ‘Serpent Column’ — a sculpture made from the melted-down bronze armour captured by the Greeks after their victory over the Persians at the Battle of Plataea in 479 BC — to the elaborate bone-work ships made by Napoleonic POWs, to Boer War, First World War, Second World War, and Cold War artefacts, to the delicate burlap textiles known as arpilleras, which represented the torment of the ‘disappeared’ in Pinochet’s Chile. These objects, and many more, each in their own way, preserved a tactile response to conflict over millennia.

Previous Achill Island: Irish island archaeology from the Neolithic to the Great Famine Next Lifelong Study