Do you really do Time Team in ‘just three days’?

We don’t cheat, we really do it in three days. We arrive the night before, but of course a great deal of preliminary work has already been done. A researcher has gone to the site, talked to the county archaeologist, got all the SMR stuff, gone to the National Monuments Record, talked to the landowner, and talked to the local museum about the deposition of finds. These are all the things a normal unit would do. There is also a site visit by the film director to decide how he or she is going to film it. Hotels are booked, and all arrive the night before. Sometimes the geophysics team will already have done some surveying, and usually people like Stewart Ainsworth and Henry Chapman, our surveyor, will have looked at the site the afternoon before. But rarely have I seen the site myself. The night before, we have a production meeting with Tim Taylor, the film director, and all our regular people. The local people – the county archaeologist, local diggers and local archaeological society people come as well. It is a chance for everybody to get to know what is going on. By that time we have the research design written by the researcher, and a lot of the background material, together with the logistical details for the three days: travelling, weather forecasts, accident and emergency departments and police. 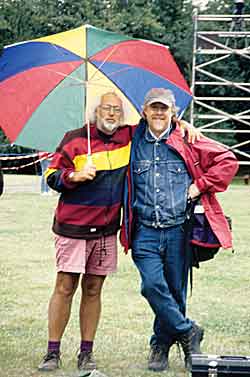 Mick, with co-ordinating jumper and umbrella, with Tim Taylor, the Executive Producer of Time Team, during the live show in Canterbury in 2000.

It’s a huge operation, moving 50 people, and it can have an enormous impact on such things as traffic. The police often put out parking signs and arrange traffic wardens, for the filming can attract vast numbers of visitors. We don’t mind people watching, but it can have a huge impact on a small village. Often the first indication that we are coming is when they see Land Rovers with the Time Team logos on the side, when the advance party go to look around the month before filming. By the morning of the first day when people turn up, we have a script.

I always think the script is a bit of a joke, as I never look at it, but the directors seem to feel they need one with some sort of structure to it. There is also a schedule of where various camera crews are likely to be during the day, when the helicopter is coming in, when crews are staggered for lunch and various things like that. Then we just plunge straight in. We first have a scene about geophysical surveys using detecting devices to see what is below the ground before we start digging. We then bring a machine in and dig the first trench – and off the project goes for about 15 hours a day for three days. A great deal of work is done over lunchtime and at night, as people discuss what we should do next and whether we should change strategy.

How has Time Team changed? How many people did you have on site in the first series and how many today?

I would say four or five times as many now, but not in terms of camera crews and so on. We always had a couple of geophysics people, but now there are often four. We also have the backup of Stewart Ainsworth doing the topographical stuff and Henry Chapman doing the computer mapping. We now book 60 into the hotel each time, and on site catering has to cope with feeding anything up to 60 or 70 people.

Has Time Team been a success? I read that you have had 2-3 million viewers throughout the series.
We discuss these figures a lot. I don’t believe them. I think a much more realistic figure that they come up with is that 15-20 million people watch at least part of a series which means at some time they dip into it. It has to be more than two million or so for the number of times I get stopped in Tesco! So I think that the number of people who have watched one or more bits over the whole series comes to about a third of the population – not counting Ireland and Holland where there are many viewers and all the repeats etc.
As to whether it is a success: remember I come from an extra-mural background, so if I can reach three million people rather than 30 in a village hall, I shall do so. My motive was to get as many people as possible interested in archaeology, because we all enjoy it and think it interesting. That was my personal aim, and I think it was Tim Taylor’s aim as well, and on that basis I think it is a success.
If people in general are interested, then elected councillors and MPs think it important too, and money and legislation flows. Many people employed in archaeology are there arguably because of public interest, and much of that interest may well have come from the Time Team programme. 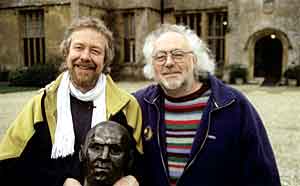 Mick Aston and his ‘rival’ Julian Richards, the presenter of the BBC’s Meet the Ancestors.

I have always been a great fan of Time Team as you do it in the CA way; you are based on excavation, you tell a story and you move from day one to day three and tell us how you got there.

That was what New Scientist said about the programme when they first reviewed it all those years ago. They said that you could see the thinking processes going on. We have somehow got to engage with a different audience, who are not going to be patronised in a ‘talking heads’ style, and this is very much Tim’s approach.

How are you in yourself?

I’ve always had poor health. I have had this farmer’s lung condition (aspergillosis) for 30 years, and I sometimes wonder that I manage to do as much as I do. But in March 2003 I had a brain haemorrhage. I was in hospital for about a fortnight and could not drive for five months. I had about 18 months of being really, really depressed which apparently is one of the side effects that one often gets. Then round about March this year, it was like a cloud lifting and I found that a lot of my energy and enthusiasm returning. Jane Lapotaire, the actress, had the same thing happen to her and wrote a book about it which I read whilst I was recovering, and it was the most helpful thing that I found.
I am now almost back to normal, but I retired from the university in August last year though I still do a bit of teaching, at Exeter and Durham as well as Bristol.

If you had your time again, would you do Time Team differently?
I really don’t think we would have been able to. If we had asked the TV people at the start for the full package of all we needed, the programme would never have been accepted. We had to balance up. It was worth cracking a few eggs to make the omelette – you can’t be too purist, especially when launching a new programme. It may be heretical, but I don’t think a lot of archaeology is all that precious. I’m not saying one should smash up the archaeology, but a lot of it is pretty low-key stuff. It is probably worth sacrificing some of the boringness to get the public interested and involved.
I think the question is, has it been worth the increase in public interest in archaeology, among children in particular, and the increase in the number of posts and the amount of money that has gone into archaeology? If Time Team is responsible for any of that, it has been worthwhile. 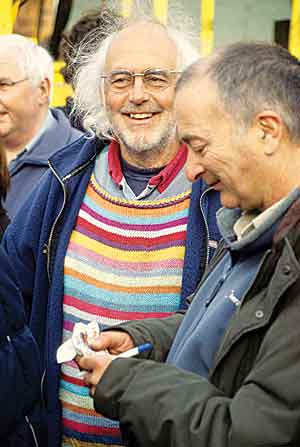 Finally, you have always been a good friend of Current Archaeology – how did you come to subscribe?

I have subscribed since the very first issue! I well remember receiving the first issue of Current Archaeology when I was at university. It came through the door in my mum’s little two up two down house in Birmingham and I remember sitting down and reading it. I was entranced, and I subscribed straight away; I have been subscribing ever since.

I have always thought it is the one-stop place to find out what is going on around the country, so if people want to know what is happening in archaeology, I tell them to get on to you.

Time Team returns to television screens on the 28 March 2010

Previous The paradoxes of running a magazine… Next Rotherwas Ribbon unwound