Northumberland National Park archaeologists, rangers and volunteers from Coquetdale Community Archaeology Group are taking part in a major conservation effort to restore the ancient monuments of the Simonside Hills which have been damaged by enthusiastic walkers.

The high sandstone ridge of the Simonside Hills is a place of legend and myth and the hills have been a magnet for antiquarians and archaeologists for over a century. On the open moorland and hidden in the modern forestry areas are burial cairns, carved stones and ancient pathways. In more recent times the ancient tracks known as ‘hollow ways’ were used by cattle drovers, rustlers and smugglers and these same paths now make it possible to explore the area. Leave the stones alone!

The range provides some of the most popular walking for visitors to the National Park, which unfortunately puts stresses and strains on the natural and historical heritage. 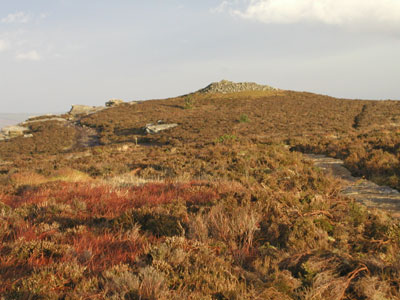 Now, the ongoing work by the National Park to prevent erosion along rights of way is being supplemented by a major effort to restore some of the County’s most important prehistoric archaeology. Project leader, Elanor Johnson said: ‘Walkers, keen to mark their day by adding to a modern cairn, often don’t realise that the source of the stone is actually an ancient burial cairn, dwelling or hill fort wall. We’d also like to take this opportunity to ask walkers not to take stone to make walking cairns, as we know they would not dream of picking wildflowers, because we need to protect the historic and cultural heritage of the area as well as our natural heritage. Northumberland and the National Park have some of the best archaeological sites in the country and we’re sure everyone wants to keep it that way.’

Northumberland National Park Authority cares for the landscape and heritage of 405 square miles (105,000 hectares) – over a fifth of Northumberland from Hadrian’s Wall to the Scottish border. As part of the Authority’s positive action on climate change, it has invested with partners in a large programme to restore the Border Mires – an important element in carbon sequestration and flood alleviation. It works with farmers and landowners to maintain healthy soils and landscapes; supports sustainable enterprises and transport and encourage domestic and community-scale renewable energy.