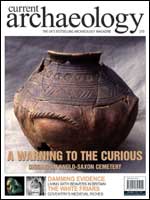 The discovery of the past depends extensively on enthusiasts who pursue their vision over many years; two such enthusiasts feature in this issue of Current Archaeology. The first is Bryony Coles, Professor of Archaeology at Exeter, who realised in the 1970s that the cut marks on some pieces of Neolithic wood she was examining were in fact made by beavers’ teeth and then there is Kevin Leahy’s “Warning to the Curious”.

Ever since her discovery, Bryony Coles has been hot on the tail of Britain’s lost beavers. When did they become extinct in Britain? The answer is much later than you think, and she argues that following the European Habitat Directive, beavers should be reintroduced in Britain. It is an odyssey not to be missed.

When Kevin Leahy first went to Scunthorpe museum, he rashly excavated an Anglo-Saxon cemetery – read all about his life ever since, as he seeks to piece together the meaning behind all those pots. Dating is at the heart of archaeological science. For the past generation, radiocarbon has thrown new light on prehistory; but now, dating by other methods is extending back further and a new panorama is emerging of the 700,000 year span since the advent of man in Britain. Clearly a crib is needed to understand the new scheme of things. A new book on Homo Britannicus is something that you cannot miss.

We also have a major article on the medieval friary at Coventry; reports on a Bronze Age waterworks in the Trent Valley and the A421 Great Barford Bypass; together with a column from Miles Russell and all the usual News and Books, it is another packed issue.