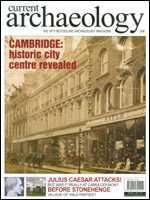 Where was Cassivellaunus’s stronghold? Cassivellaunus is the first named character in British history – named by Caesar as leader of the resistance to his invasion in 54 BC. The stronghold stormed by Caesar that year is usually assumed to have been Wheathampsted in Hertfordshire. But was it?

In our first bigfeature this issue Philip Crummy puts a strong case that it was actually Camulodunon in Essex – and paints a vivid picture of Cassivellaunus as a tribal cattle-baron.Our second big story takes us to an abandoned Second World War airfield in North Yorkshire, where Durham University archaeologists have found a huge Neolithic monument of 2000 timber posts beneath the former runway. It is one of several similar found recently, some even larger. What were these ‘palisaded enclosures’? What rituals were performed in them? And were hill-top viewing stands provided for Neolithic VIPs? Despite the number of academic archaeologists based there, Cambridge has a poor record for doing its own archaeology. Until now. The Grand Arcade Project, the biggest excavation in the city’s history, took a huge slice out of the medieval and modern archaeology. In our third feature excavators Alison Dickens and Craig Cessford give us a rich new insight into a thousand years of town and gown. Amber, gold and a prehistoric henge-barrow is the theme of the fourth feature. Metal-detectorist Cliff Bradshaw’s discovery of an Early Bronze Age gold cup on Ringlemere Farm was one of the archaeological sensations of 2001. Since then, local archaeologist Keith Parfitt and British Museum specialist Stuart Needham have been digging the field. So can they tell us what one of the finest Bronze Age objects ever found in Britain was doing there? Also in this issue, we review an important exhibition of Flinders Petrie’s work in Palestine, and a major new series on Welsh TV charting the lives and achievements of the great princes of medieval Wales. Our first News item reports the latest on treasure and portable antiquities, Antony Francis decries cutbacks in local government heritage services in his regular column, and David Miles heads up our Books section with a review of several new volumes about the genetic origins of the British.