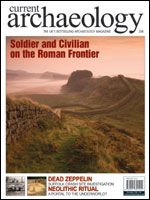 Northern Britain was a military zone in Roman times. There were no towns or villas, but instead a series of army bases guarding the uplands. While the fat-lands of Wessex, East Anglia and the Midlands were ruled by Romanised gentry, the North was under army commandants. How did it work? What was the relationship between soldier and civilian?

Though we know a lot about the Roman army in the North, we know far less about the natives. Forts have been well studied. Vici — the civilian settlements around the forts — have not. Now Alan Biggins and David Taylor have carried out geophysical surveys at 13 vici. The results have shown us how little we knew: a radical new picture of life on Hadrian’s Wall is emerging. We report on this in our first feature. Then we go much further north: to East Coldoch near Stirling in Scotland’s Central Lowlands. The Roman army was here in the late 1st century and again in the mid 2nd century AD, and the more entrepreneurial natives seem to have seized the chance to trade. Birgitta Hoffman and David Woolliscroft have been excavating a grand Late Iron Age roundhouse with a touch of Roman refinement. Our third feature transports us to rural Suffolk in 1917. At Theberton Hall Farm, a team of archaeologists, metaldetectorists and aviation enthusiasts have just excavated the site where a German Zeppelin came to ground after being shot down by British fighters. What did they learn about Britain’s First Blitz? Meanwhile, at Boston Spa in Yorkshire, community archaeologists have been uncovering the remains of a bizarre Neolithic ritual site which includes mysterious stone carvings and rubble animal ‘pictures’. Equally mysterious are the 17th and 18th century graffiti carved into church stonework that Giles Standing has been studying: are they evidence of the religious conflicts of the age? Then in our last feature we return to the Romans. Medbourne in Leicestershire — like East Coldoch above — featured in Time Team’s Big Roman Dig in summer 2005. A Roman small-town, the site had also yielded Early Anglo-Saxon evidence. Our report looks at whether the site is a rare example of continuity of occupation from the 4th to the 6th centuries AD. In addition, Antony Francis writes about the publication crisis in archaeology, Cei Paynton asks whether the war between archaeologists and metal-detectorists is finally over, and Andrew Selkirk, our Editor-in-Chief, has his customary Last Word. In News we have a report on a Roman murder, and in Books a special feature on a new walking guide to Roman Britain.