Roman mosaics are perhaps the most spectacular Roman remains in Britain. Many of the finest come from Roman villas, where they reflect the high artistic tastes of the wealthy villa owners in the fourth century. Most are in colour, and many are figured, almost always with classical scenes.

David Neal has been painting mosaics for many years in his capacity of chief illustrator of English Heritage, but following his retirement, he joined with Steve Cosh to produce a corpus in four volumes of all the known mosaics in the country. Between them they set out to paint them all by hand: many of them are only known from oblique black-and-white photos, but by drawing them, and restoring the original colours where these are known, it is possible to show just what they originally looked like.

They hope to publish them in four volumes – providing they can find a suitable publisher. 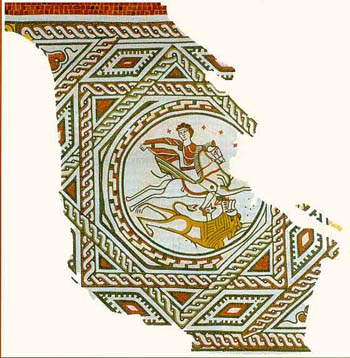 The worst mosaic in Britain? Well, it depends how you look at it.
In many ways this mosaic, from a villa at Croughton, near Banbury, is a fine vigorous piece, showing Bellerephon slaying the Chimera. But unfortunately the mosaicist miscalculated his layout – see how the border encircling the central roundel collides with the star shaped surround. One can almost sympathise with someone whose artistic temperament was not quite matched by his geometrical abilities.
But it is still, in its way, rather splendid!

David Neal nominated this as his finest mosaic from Roman Britain. It’s not a figured mosaic – but look at the detail – and the flair – of the design, which is of very superior quality using very small tesserae.

It was found Leicester, at the Blackfriars, and is now one of the highlights of the Jewry Wall Museum. 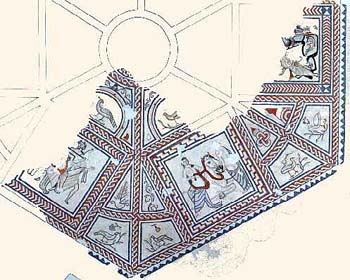 This is Steve Cosh’s favourite mosaic.
What you see is a Roman picture gallery. Whereas on the continent, villa owners usually preferred to have a single large figure, the British preferred to have several scenes showing the great pictures of antiquity.

Here we see Europa on the Bull, Minerva gazing at her reflection, and Achilles on Skyros hearing the war trumpet – three of the greatest – and most hackneyed – paintings in antiquity: it is rather like having the Mona Lisa, the Haywain, and van Gogh’s flowers all side by side on your verandah floor.

Keynsham, near Bath, was one of the greatest Roman villas, but unfortunately it was mostly destroyed when the Bath-Bristol road (the A4) went through it, fortunately on an embankment. Today however the mosaics languish in small parts in a cellar in Keynsham town hall, where Steve Cosh was able to make this superb reconstruction 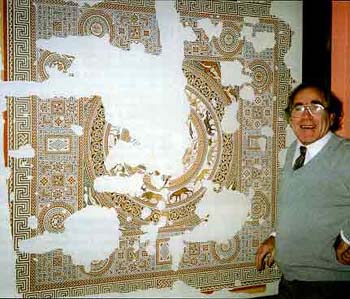 The Woodchester mosaic is the largest known mosaic from Roman Britain. It probably formed the audience chamber of a palace – there were four pillars at the corners of the central roundel – and each individual section is the size of a normal mosaic

When it was last uncovered in 1972, David Neal spent three weeks drawing it in situ and taking numerous colour photos. He then spent 18 months painting it – after which he couldn’t face the idea of painting another mosaic for a further 18 months.

This is based on a fuller account in Current Archaeology 157, published in May 1998