BIN09′ is the site code for  this year’s season of  the major new field project at the Roman fort of Binchester, run jointly by Durham County Council, Durham University and Stanford University, where I  have just spent a week digging.  In addition to the on-site professional staff (Dr David Mason, David Petts, Jamie Armstrong, Janice Adams and Matt Claydon) and students, many volunteers from Durham and Northumberland Archaeological and Architectural Society and Northern Archaeological Group participated in the work. 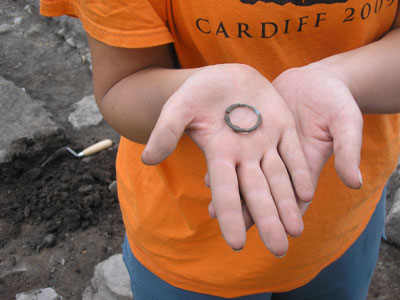 What an amazing experience! Before I talk about the site, let me first say a huge thank-you to Jamie, Janice and Matt. Their professional guidance, patience and willingness to instruct and educate the volunteers (a widely varied group, in terms of knowledge and experience) really made the week enjoyable. There is a huge amount of satisfaction in actually getting on-site for those of us who do not have the chance to do it very often, and to be welcomed and allowed (expected!) to contribute real work was exceptionally good fun.

The Binchester fort and Roman settlement is largely unexplored, though there are some fully excavated areas that are open for public view. The project design for the new excavations, planned over five years of summer seasons, includes exploring the later fort interior, the south-east gatehouse and part of the civilian settlement. The questions that the project hopes to answer include whether the sub-Roman occupation was limited to the commandant’s house or if it extended across much of the fort’s interior? An answer to this question may allow a better understanding the nature and function of the afterlife of the fort; was it a tiny enclave of localised activity or did it continue to function as an important power centre after the end of Roman Britain? 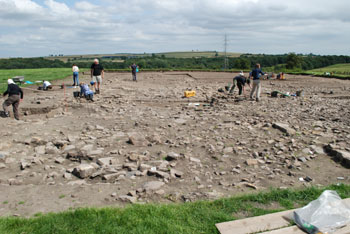 This year’s digging encompassed an area in the eastern corner of the fort to the north of Dere Street and the commandant’s house, containing a likely barracks, defences on the north-east and south-east side of the fort, and some Medieval features. I arrived on site for the last week of a nine-week season, so there was only a tiny bit of digging still to be done, plus lots of cleaning back, planning, photography and filling out context sheets. Nevertheless, in the small strip of baulk (about 3 feet long and8 inches deep) I was given to take down, I managed to contribute a few nice small finds, including a pennanular ring, whetstone and fragment of a jet ring. Lucky me! The fellow who had been digging that patch the day before had been turning up nails and bits of bone, and he had stopped for the day just a few inches short of where I found these goodies. Ah well, that’s the luck of the draw. Luckily, the weather held off for most of the week (though with the inevitable northern moments), which actually created a bit of a problem as the site was extremely dry by Friday. 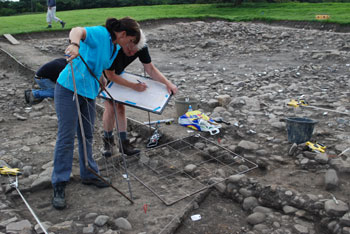 In talking with the volunteers during elevensies and lunch, I discovered that many of them are close to being ‘circuit archaeologists’, in that they travel around for most of the summer from dig to dig, putting in anywhere from a week to three weeks of work at each place. And the best part- a few of them were CA subscribers, and one had been with us since Issue #1! I also met a few students, many of whom work at full-time jobs, who had taken holiday to participate at Binchester. It was inspiring to realise how many people take enough of an interest in archaeology to commit their personal time to doing things like this; likewise, it was amazing to see the level to which the volunteers are included in the site work.

The site has a very informative blog (http://binchester.blogspot.com/), where you can read detailed reports of each day’s work, and also see a ‘small finds round-up’ of all the interesting things turned up this season. It will be updated fortnightly, as preliminary results come in from the post-ex. Take a look- it’s well worth seeing!

Previous The Hadrian's Wall Pilgrimage Next Buckles, belts and borders