Joe Flatman explores half a century of reports from the past.

A selection of articles mentioned by Joe Flatman in this month’s column below can be accessed for free for one month via Exact Editions, from 5 October. Use the links within the text to jump to the individual articles, or click on the covers below. Print subscribers can add digital access to their account for just £12 a year – this includes everything from the last 50 years, right back to Issue 1! Call our dedicated subscriptions team on 020 8819 5580, quoting DIGI332, to add digital access to your account, or click here for more information. 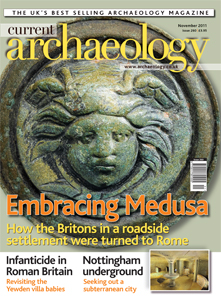 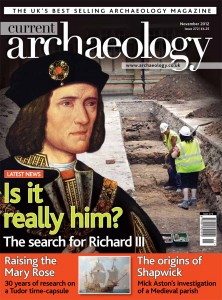 Joe Flatman is Head of Listing Programmes at Historic England and the former County Archaeologist of Surrey. You can follow him on Twitter @joeflatman

This latest excavation of the CA archive digs into a topic close to my heart: the medieval period. I begin on a note of personal reminiscence – my love of this subject is connected to the individual who was also responsible for my love of Current Archaeology: Colin Platt. I hope that his name is one that many readers will recognise, but, for those who don’t, Colin was an exceptional scholar of medieval art, architecture, and archaeology right up to his death in 2015. He was also one of the kindest humans that any of us will be lucky enough to meet, and one of those acts of kindness brings me back to CA. Colin first took the 18-year-old me under his wing at Southampton University back in the early 1990s, fostering my love of all things medieval. And when he retired in the early 2000s, he most generously gave me his complete back-run of CA, from issue 1 onwards. It was thumbing through those back-issues a couple of years ago that gave me the idea for this column. So, in summary: no Colin = no ‘Excavating the CA Archive’.

Colin appeared in the first ever issue of CA, back in March 1967, leading the rescue excavations of, appropriately, medieval Southampton. The fieldwork there began in the 1960s, and has continued, off and on, through the ‘rescue’ days and on into post 1990 ‘commercial’ archaeology, as reported subsequently in CA 17, 79, and 279, among others. Southampton’s history of investigation down the years sets the tone for much other medieval reporting in CA: it is a litany of famous sites and excavators, often initially reported as small ‘rescue’ digs, then later on as much larger ‘research’ or ‘commercial’ projects. The ‘deserted’ medieval village of Wharram Percy, perhaps the most influential of all medieval excavations, since it was the training ground for a generation of fieldworkers, first appears, for example, in CA 4 (September 1967), and then is featured regularly down the years, most notably in CA 49 (March 1975) as the cover story. (See also CA 80, 117, 193, and 200 for later reporting.)

The rescue excavation of major medieval centres was inevitably a regular theme across the early years of CA. My previous column on Anglo-Saxon and Viking Age reporting explored fieldwork at cities like York and Winchester; to these can be added here work on medieval Norwich – which starred on the cover of CA 48 (January 1975), then again in CA 68, 80, and 209 – and also Northampton, appearing in CA 46, 79, and 91. Rereading reports on the latter is a reminder of just how fast the pace of development was in such cities. CA 46 (September 1974), for example, began with the following comment: ‘in 1965 Northampton was designated an area of considerable expansion, under the New Towns Act of the same year, with proposed growth from its then current population of approximately 130,000 to a total of 230,000 by the 1980s, and the likelihood of a further population increase to 300,000 by the end of the century’. The associated map of excavations across the city shows this impact: it is pockmarked with trenches, big and small.

Thankfully, not all the fieldwork at this time was undertaken at the pace seen in locations like Northampton. CA 69 (November 1979), for instance, reported on a rather different type of urban site, and one with perennial appeal: the honeycomb of caves underlying Nottingham Castle. This issue was the first to report on these, but CA returned in issue 260 (November 2011) to cover the results of extensive laser-scanning, an approach that has transformed our understanding of the shape and extent of the caves.

One of the most dramatic medieval castles in England that is open to visitors then appeared on the cover of CA 91 (March 1984): Beeston in Cheshire. This stunning hilltop site was at that time under excavation prior to the installation of new access facilities, especially the modern bridge that gives access up a steep slope to the inner ward. Although focused on the medieval castle, the project ended up discovering as much about its early modern history after having been slighted at the end of the First English Civil War in 1646.

In a different vein, it is impossible to discuss medieval archaeology in the pages of the magazine without mentioning monasticism in its many forms. The range of site-types associated with the different orders is stunning: from the grandiose rural layouts of the Cistercians to the tighter urban settings of many friaries, and on to often tiny, hermit-like sites. The first visit CA made to a major monastic site was in issue 31 (March 1972) to Norton, an Augustinian house in Cheshire that was then being excavated with the intention of turning it into a museum. Happily, this did take place. Indeed, Norton reopened as a visitor attraction in August 2016, following a major Heritage Lottery Fund-supported redevelopment project (the museum is reviewed in CA 324).

The next monastic site CA visited appears in issue 97 (July 1985). Jedburgh in the Scottish Borders is another Augustinian site, this one with stunning upstanding ruins. CA 107 (December 1987) visited, by contrast, the tiny Fishermen’s Chapel in the parish of St Brelade, Jersey. Here Warwick Rodwell had carried out a total excavation that revealed the church was built over the top of a Bronze Age menhir. A similarly atmospheric site (and an international one, I suspect visited as a consequence of a serendipitous Selkirk family holiday) featured in CA 126 (October 1991): Pinel monastery, near Toulouse – the photos of which show a site slumbering amid the lush vegetation of summertime southern France – and its British Grandmontine cousin Craswall Priory in Herefordshire.

Romantic monasteries in exotic locations may suit some tastes, but closer to home CA 151 (February 1997) reported – with one of the finest cover photos ever – on Mick Aston’s long-running fieldwork at Shapwick in Somerset, exploring the origins and development of the medieval village landscape. (CA would return in issue 272, November 2012.) Long before he found fame on Time Team, Mick had been working here, and his activity, including extensive community involvement and rigorous publication of results, remains a model of exemplary archaeological practice that we all ought to aspire to. The cover proves his dedication to the project: as the caption comments, ‘Mick has broken his leg jumping over a holy well and thus has one foot in plaster and is leaning on a stick’. The pleasures and perils of medieval fieldwork combined…

There have been so many good medieval stories down the years in CA that I could fill a dozen more columns with them. To conclude, though, one story undoubtedly captured public attention above all others: the extraordinary discovery of the remains of King Richard III in Greyfriars, Leicester. CA 272 (November 2012) first featured this story, and since then the news has come thick and fast, in CA 277, 294, 296, 302, and 303. It is wonderful that this project has received such global attention, bringing the joys of medieval archaeology to a new generation of readers and, I trust, the next generation of fieldworkers as well.

Read articles discussed by Joe for free online via Exact Editions – you can find the links to the individual articles in the text above, or click here to see all issues of Current Archaeology. A selection of articles mentioned in this column will be available for one month, from 5 October. Print subscribers can add digital access to the entire back catalogue of CA for just £12 a year – simply call us on 020 8819 5580 and quote ‘DIGI332’.