Yesterday evening, I was killed at least 50 times. I was stabbed, slashed, poked, cut, beheaded, dismembered and left for dead. In other words: I attended my first class at the Schola Gladiatoria.

I had absolutely no idea what to expect and approached the doorway with a mix of trepidation and Christmas-morning level excitement. The instructor, Matt, was very welcoming and gave me a quick run-through of what happens in class, as he was emptying his duffel bag of various wooden swords, shields, gloves, helmets and other ominous-looking things I can’t quite identify as yet. Other members of the class filed slowly in, everyone seemed quite nice, and it was clear to me that this is a very chummy group. They all seem to be at different stages in their training, so I didn’t feel out of place at all as a beginner.

We started out with a warm-up, after which we were all ready to get down to business. We each geared up with a practice sword, and we began to train with very basic cutting and slashing techniques. We moved on to some backward movements as well as footwork and some choreographed fight routines. It looks easy when you see it in the movies, but let me tell you – if you’re not used to handling swords (which I’m guessing most people aren’t) or using your arms for such strenuous activity, it gets hard quite quickly. As the swords we were using were only a fraction of the weight of an actual steel weapon, it gives me a whole new respect for how strong fighters must have been back in the day. Additionally, the footwork is crucial; much like boxing, it is more important to avoid being struck (or in this case, cleaved) than it is to land a blow on your opponent. Likewise, without proper footing, none of your attacking movements will have sufficient power behind them. It’s a lot to think about and I did feel that I was embarking on an unexpectedly fascinating part of swordplay. It’s a great workout, too- my heart rate was up the entire time, not to mention the adrenaline rush one feels from even mock combat. 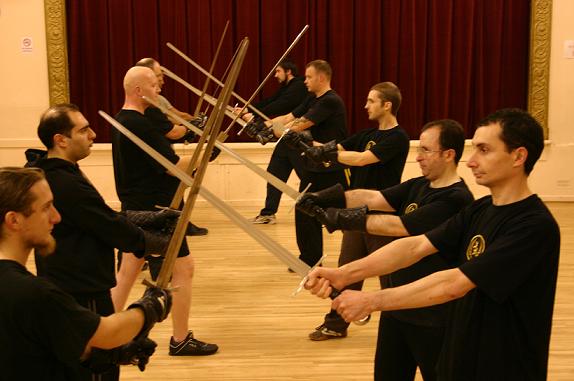 It has to be said: I’m not very good at this all. But, I can see how wanting to improve gets addicting! I feel determined to go back and get better. At the end of class, there was a sparring session, and it was thrilling to watch the more highly trained students go after each other in unchoreographed fights. Steel clashing, face-masks in place, it’s really a good show. We beginners also got a chance to spar with the instructor, but as I was already nursing a gigantic blister in the crook of my thumb on my pommel-side hand, I decided to opt out. I left the studio with his correctly dismissive comment ‘Wuss!’ ringing in my ears. We’ll see about that- I’m definitely going back for more. And I’ll be taking pictures, too!

Previous Deep inside Silbury Hill Next Has Stonehenge's huge support settlement been found?