Worship, Death and Taxes: the story of Higham Ferrers 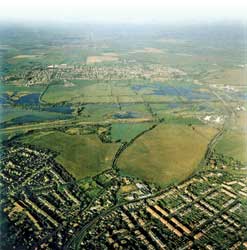 Two very important discoveries have been made at the multi-period site of Higham Ferrers, in Northamptonshire: one a Romano-British shrine complex, and the other an example of the realities — and occasional brutalities — of Middle Saxon regional government. Oxford Archaeology’s Alan Hardy takes up the story.

Higham Ferrers lies in what is now an inconspicuous dry valley, bisected by a footpath called King’s Meadow Lane. Interest in the site grew when preliminary fieldwalking, a survey of cropmarks and a geophysical survey pointed to Iron Age, Roman, Saxon and Medieval activity, curiously not — it seemed — all on the same site. Was this a shifting, but long-lived settlement? Could it be the progenitor of the Medieval borough of Higham Ferrers, which lies a kilometre to the south, with a castle and fine buildings stretching along the southern bank of the River Nene as testimony to its prosperous Medieval heritage? 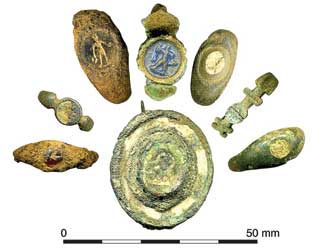 The topography of the site, on the shoulder of a ridge looking over an easy crossing point of the Nene river, probably indicates its perennial attraction, if only (as in the Bronze Age) as a conspicuous site for burial, as indicated by a collared urn cremation, and a ploughed-out round barrow. A Middle Iron Age settlement was also partially excavated, revealing a handful of roundhouses, each surrounded by a substantial enclosure ditch and bank. Not defensive, though: the banks were outside the ditches, suggesting a more pragmatic function, perhaps denoting status or retaining stock. They would have served as good windbreaks too; for, as the archaeologists found to their cost through some very inhospitable winters, the site was at the mercy of penetrating easterly winds.

Romans
In the early second century the Roman settlement developed along the road that tracked across the exposed eastern side of the ridge, overlooking the river. To the south-west the road probably ran on to the small town of Irchester. To the north-east lay the villa estates of Redlands and Stanwick.

The area under investigation seemed to be on the northern outskirts of an unenclosed settlement. Three circular dwellings were found, two of which were served by wells, the third being set within a rectangular ditched enclosure. The buildings probably represented piecemeal expansion along the road from the settlement core to the south. The population appeared to be of modest status, although a slave shackle from one of the buildings attests to at least some degree of social hierarchy. 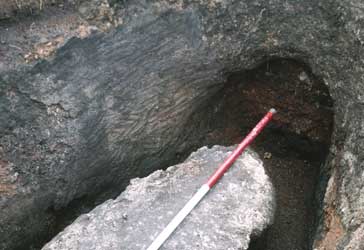 Major changes took place in the later 2nd century, with the orderly division of the land into individual properties defined by ditches running back from the eastern side of the road. The new buildings were rectangular and stone-built (although at least one of the circular buildings remained in use until the 3rd century), some fronting onto the road, some at right angles. Along a 100m stretch of the road, a gravelled pavement was carefully constructed running in front of the properties, suggesting a collective or municipal enterprise. Directly across the road at this point was the possible reason for such public largesse.