The Archaeology of Leprosy and the Black Death 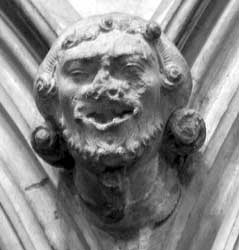 By contrast with those familiar institutions of the post-Norman era, the castle, the abbey and the church, Medieval hospitals have received little attention from archaeologists. That deficiency has now been remedied by the publication of Lepers Outside the Gate, edited by John Magilton, Frances Lee and Anthea Boylston, in which they report on excavations carried out in 1986—1987 and 1993 at the cemetery of the Hospital of St James and St Mary Magdalene, Chichester.

John Magilton, the site director, says, in self-deprecation, that this was at times ‘a tedious site’, and anyone who has dug a cemetery will know just what it means to excavate graves day in day out. But the results more than justify the effort: the nearly 400 skeletons from the site constitute the largest sample from an English Medieval hospital ever to be excavated and one of the first sizeable groups of leper graves to be excavated in Europe. Analysing the bones tells us much about leprosy, but also about the changing pattern of disease during the period that the hospital operated, from the early 12th to the mid-17th century. 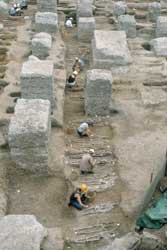 Out of Asia
Leprosy is a very old disease; so far, the earliest archaeological evidence for human infection with Mycobacterium leprae in the world comes from a skeleton buried around 2000 BC in Rajasthan, India, at the site of Balathal, a large agrarian settlement at the margins of the Indus (or Harappan) civilization. The earliest written descriptions of the disfiguring disease are found in the Sanskrit Atharva Veda, composed before the 1st millennium BC. The westward spread of leprosy is attributed to Alexander the Great’s invasion and conquest of what is now Pakistan, in 326 BC, and the subsequent return to Europe of his army. 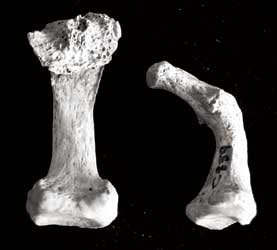 Attitudes to the disease in Europe were complicated by Biblical references to various physical and mental conditions that have all been translated by the single term ‘leprosy’, but that might, in fact, refer to various different conditions, including impetigo, scabies, eczema, psoriasis, dermatitis, Reynaud’s disease, elephantiasis and various fungal infections. Conflicting advice in the Bible coloured theological, legal and social responses to the disease when leprosy became a significant problem in Europe from the 11th century. The Old Testament presented leprosy as an outward manifestation of spiritual sickness or something inflicted by God as a punishment for sin. Sufferers were not welcome in normal society; as Leviticus says of lepers: ‘Unclean, unclean … without the camp shall his habitation be’ (Lv 13: 45, 46).

By contrast, Jesus (amongst other transgressions of Hebrew purity laws) was accused of associating with lepers and of ‘cleansing’ them. St Luke’s Gospel records the parable of Lazarus and Dives, in which Lazarus is described as a beggar covered in sores sitting at the rich man’s gate, while St John says that Jesus raised a man called Lazarus from the dead. Though these are two separate individuals, popular conflation of the two led to the assumption that both suffered from leprosy, hence the common Medieval term for lepers was Lazar or Lazard. A similar conflation of Mary of Bethany (the brother of St John’s Lazarus) with Mary Magdelene (along with the association of leprosy with sexual excess and prostitution) led to lazar-houses, or leprosy hospitals, being dedicated to St Mary Magdalene, as in Chichester.
Caught, then, between the idea of lepers as sinful outcasts and lepers as proper objects of charity, the Church (by a decree of Pope Alexander III in 1179 that was ratified by the synod of the English Church in 1200) declared that lepers should have their own separate churches, houses and priests, while the 4th Lateran Council of 1215 strongly encouraged the giving of alms to leper hospitals.   This last decree was a nice piece of sophistry, which boosted benefactions by arguing that lepers were undergoing the punishments of Purgatory here on earth and therefore had an early passport to Paradise, where they would be able to intervene all the sooner on behalf of those who invested in leper hospitals. 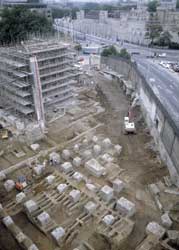 The burials
Such was the prevalence of leprosy between about 1100 and 1300 that several thousand leper hospitals were founded in western Europe; Medieval Chichester had no less than six. Founded in the reign of Henry I (1100—1135), the whereabouts of the hospital dedicated to St James and St Mary Magdalene in Spitalfield Lane had long been known, but the existence of the associated cemetery was only discovered during the construction of post-war council houses, in 1947. Further housing development from 1986 led to the Chichester District Archaeological Unit excavating approximately half of the graves, the rest remaining undisturbed beneath what is now a public park. 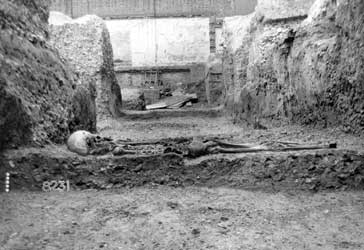 Dating of the 384 excavated graves depended mainly on ceramic sherds of domestic origin accidentally incorporated into the grave fill. This suggests a cemetery of two halves. In the earlier south-westerly section of the graveyard, almost half of the burials had symptoms of leprosy. As this hospital was originally founded for men only, it is not surprising that 84 per cent of these early burials are male. Of the females, two show signs of leprosy, but two others were buried within a mortuary house at the eastern edge of this early cemetery phase, walled off from the other burials, and grave goods of small bronze pins around the head of one of the women suggests that she might have been a nun, buried in her religious wimple.

The burials in the later north-easterly section had a more normal population structure, reflecting a possible change of policy to allow the admission of women. Though there are no historical records of children being taken in, the preponderance of sub-adult remains in the eastern part of the cemetery suggests that the hospital also provided shelter for foundlings, orphans and the children of adult residents. The decline of leprosy can be tracked through a historical reference to the admission of the last leper in 1418, and through the growing variety of diseases (such as scurvy and rickets) and injuries represented in the later graves as the hospital became more of a general almshouse for the needy from the 15th century and through to its post-Dissolution demise (in 1705 it is described as ‘ruinous’).

Previous Trophies of Kings : The Staffordshire Hoard Next Water-power in Medieval Greenwich