Roman Wrawby: a site that can’t decide its status 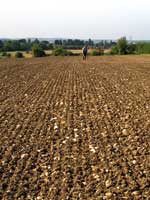 When is a Roman villa not a villa? The term villa covers many different structures, ranging from a palatial country house down to a jumped-up small farmstead. At Wrawby, we have discovered what appears to be a villa at the lower end of the range — a farmstead with pretensions.

Wrawby lies in north Lincolnshire, halfway down the Ancholme valley, two miles east of Brigg and eight miles east of Scunthorpe. In pre-Roman times the Ancholme valley would have been marshland, separating the Lincolnshire chalk wolds to the east from the end of the limestone Jurassic ridge to the west. Both Lincoln and Scunthorpe are situated on this ridge, along with Dragonby, the late Iron Age/early Roman site that Jeffrey May spent many years excavating.
Having published a book on Victorian Wrawby, the small Local History Group sought a new project with which to mark the Millennium and decided to fieldwalk a local field known for its surface scatter of artefacts and limestone blocks. Aerial photographs revealed a sub-circular feature in the lower of the two fields, but nothing in the upper field where most of the finds were located. Both fields are arable and the upper field is frequently planted with deep crops such as potatoes and beet, so it is logical to expect any underlying archaeology to have already been dredged to the surface.

North Lincolnshire has a number of fairly grand Roman villas. Horkstow, with its famous mosaic of chariot racing that is now in the British Museum, lies six miles to the north. The mosaic was first discovered in 1796 and lifted in   1929, when the pavement was all that mattered; thus, the site is disturbed to the point that it is impossible to even establish the orientation of the villa

. Winterton is probably the best known and most recently excavated site, while at Roxby, on the west side of the valley, the so-called blackbird mosaic was discovered in 1699 and re-excavated in 1989. It appears to have been an aisled building, a format prevalent in this corner of Britain. Deepdale was also an aisled building, but that was clearly a farm with none of the trappings of status or wealth. Although other, larger villa complexes often have an accompanying aisled building around the courtyard, our aisled buildings at Wrawby may have, in fact, been the main building. 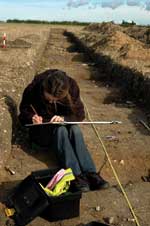 It was established from the onset that Wrawby was more than a simple, lowly farmstead.   Hundreds of pieces of ceramic roof tile were collected. Some of the larger pieces of tegula had trails of finger-drawn lines/loops on the back but no stamp. The imbreces were harder to find, breaking into smaller pieces, and the antefix even more difficult to identify as nothing was decorated. Another oddly shaped piece was identified as a possible anchor, protruding at right angles from the antefix to hold them in place — though only one has been found. Vitrified pieces of tile suggest local manufacture, but that is not unexpected in a region where Barton is the best known of the clay pits. Clearly there was a building at Wrawby capable of supporting a heavy roof, and the scattered limestone suggested substantial stone walls.

A handful of combed tiles make a case for a hypocaust. Plotting finds of brick or ‘thicker tile’ has not revealed the location on the ground of pilae, but it is fair to assume that the building would have been constructed of stone, not timber. Perhaps a small detached bathhouse, for which the water supply would not have been a problem on this site.