Roman Mosaics of Britain: the view from the South East 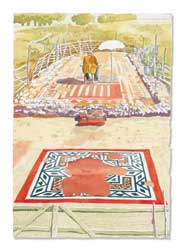 David Neal and Stephen Cosh have reached the South East England stage in their marathon undertaking to publish every known Romano-British mosaic. Chris Catling reports on what, in mosaic terms, sets this region apart.

The South East differs from the other regions of Britain in important ways that are reflected in the number, quality and date of its surviving mosaics. Being closest to continental Europe, it was the first area of Britain to come into contact with Roman culture. As a result, it is the area of Britain that is richest in early mosaics — indeed, the villas of the region, especially those of the Sussex coast, contain the first mosaics to be found in any civilian context in Britain. Economically the south-east is different, too: the 2nd and 3rd centuries marked a period of great affluence, and the 4th century one of decline. This is reflected in the disproportionately high number of top-notch 2nd and 3rd-century pavements compared with other parts of Britain, and fewer that are datable to the 4th century.

London and the provinces compared 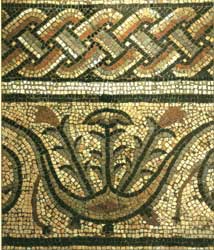 Within this already unusual region, London is even more distinctive. In villas at Fishbourne, Lullingstone and Bignor, and in the grander villa-like houses of such cities as Verulamium, Colchester and Silchester, the finest mosaics were used to distinguish the audience rooms, where business and estate matters were conducted, or the principal dining rooms, where guests were entertained. A characteristic of such rooms is their central position within the plan of the house or villa, and their broad entrance, perhaps with views of a garden, courtyard or landscape. Fittingly, the mosaics on the floors of these rooms feature subjects that are appropriate to conviviality and hospitality — such as a cantharus (wine cup), a bowl, basket or cornucopia — or, more rarely, the figures of Bacchus, or Ganymede, cup-bearer to the gods.

Comparing room sizes, a mosaic floored room in a house in Verulamium has a floor area of 36m ², with a central decorative panel that is typically 16m ² in area, covering some 45 per cent of the room. London, by contrast, has none of the luxurious townhouses found in the civitas capitals, with their bath suites and sumptuous apartments. Instead, this is a city of merchants whose narrow strip houses, set at right angles to the street, had a working end, consisting of a shop that opens onto a street colonnade and a back-room that served as a store, while narrow alleys gave side access to small private rooms extending towards the rear of the plot. 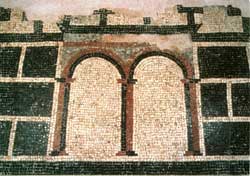 Floors of beaten earth or mortar are more common than mosaics and where mosaics are found, they are smaller and plainer than provincial counterparts, set in rooms of 22m ², with central panels that are 8m ² in area, covering 34 per cent of the area. Simple geometric or floral designs are the norm, rather than the big multi-panelled figurative mosaics of the provinces, but the floors are of good quality, which, the authors argue, shows that mosaics were well within the means even of Roman Britain’s mercantile class.

In fact, London’s canny merchants even deployed mosaics as a form of self-promotion. A fragmentary mosaic inscription from Monument Street records the sponsorship by an unknown donor of a mosaic in a public building. In Ostia, where such inscriptions are common, merchants advertised themselves and their philanthropy through such gifts. Given the proximity of the find to a large fish market on the corner of Pudding Lane and Monument Street, it is likely that donor was a merchant involved in the fish trade. 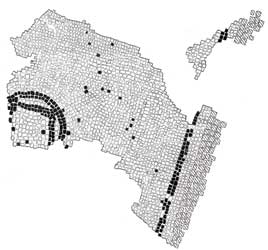 Black and white precedes colour
When it comes to public buildings, however, London is far from being in the second league. Loose tesserae and mosaic fragments from Boudiccan destruction layers suggest that London had the black and white geometric mosaics typical of the earliest phase of mosaic making in Britain, with patterns made up of squares, triangles, lozenges and rhomboids. The fact that the destruction debris from buildings in Leadenhall Street includes tesserae of imported marble offers tantalising evidence that at least one building in the area, perhaps an official structure rather than a private residence, was even more luxuriously decorated.

One of the South East’s earliest surviving mosaics is also found in London, at Watling Court. However, it is a curiosity in that it only just qualifies to be called a mosaic, being principally composed of pink opus signinum, made from lime, water and crushed tile, into which mosaic roundels and crosslets have been set at regular intervals. It dates from the late 1st or early 2nd century, like a similar floor from Reims, although other parallels for this technique date from some 150 years earlier, in Republican Rome.

Previous The “champion’s portion”? prehistoric feasting at Llanmaes Next A ‘Splendid Idiosyncrasy’: Prehistory At Cambridge 1915-50