The Lingering Death of Roman Britain 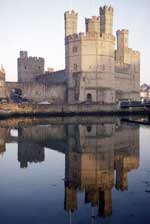 In the centuries while Eastern England succumbed to Germanic takeover, Britannia Prima still flew the flag for Rome. Only in 1278, when Edward I captured Caernarfon, did this last outpost of the Western Roman Empire fall to a ‘barbarian’ king. Roger White of the Ironbridge Institute, University of Birmingham, describes how Romanitas endured on the empire’s furthest fringe. It was no accident that Edward I designed Caernarfon Castle to resemble the Late Roman fortifications of Constantinople, nor that he took the time to bring to the locality a body said to be that of Constantine II, son of Constantine the Great: Edward was well aware of the political and mythical significance of his success.

The Romans had divided Britain into four provinces in around AD 286. Three of these, whose capitals all lay on the eastern side of Britain, had rapidly collapsed in the 5th century. Yet the experience of the western side of Britain was different: a glance at a map of Early Anglo-Saxon burials shows that penetration of the Welsh Marches area was
minimal, while the conquest of Cornwall had to wait until the 10th century, and South Wales only succumbed to the Normans. Why had it taken 800 years for Roman Britain’s last province to be conquered? 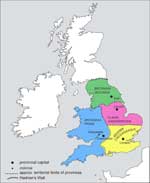 Crucial to our understanding of these developments is a coherent account of the 5th population, perhaps stiffened by a core of Irish warriors, such as Cunorix, whose tombstone survives from Wroxeter (CA 9). That this town had a military force is implied by the discovery of ten lead-weighted darts (martiobarbuli) found there, the largest number from any site in the Western Empire. Similar weapons have been found at Caerwent. Further evidence of the military prowess of the Cornovii in particular is the existence of the Cohors I Cornoviorum on Hadrian’s Wall. It all tallies with the tradition recorded by Gildas, who tells of successful resistance, perhaps at the end of the 5th century, by the people of the West under the command of Ambrosius Aurelianus (a war leader whose exploits may be the origin of the Arthur legends). Archaeological evidence also implies the continued existence of towns, albeit in different form: Wroxeter is the most famous example, but Chester has yielded similar evidence, and so have the other major towns of the province to an extent. An attempt to maintain civic standards is implied, and perhaps therefore an ideologically motivated interest in upholding Romanitas. 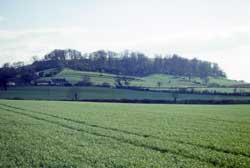 This is an extract from the article, written by the author of Britannia Prima: Britain’s last Roman province, can be read in full in Current Archaeology 211

Previous Rebuilding a Roman fort Next Hadrian’s Wall: 30 years on