Kenilworth Castle: the wooing of a Virgin Queen 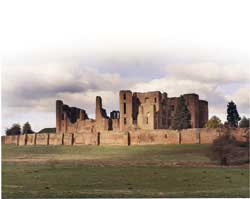 English Heritage has just spent £2.1 million recreating an Elizabethan garden based on an eyewitness description published in a letter in 1575. But was the letter a spoof made up by rivals for the Queen’s favour, and what part did archaeology play in pinning down the truth? Chris Catling investigates.

Hearts and entwined initials cover the graffiti-scarred walls of Kenilworth Castle, engraved into the soft red sandstone by generations of lovers for whom the castle has served as a romantic rendezvous. Until recently, however, there was no visible reminder of the most famous of all the lovers’ trysts to have taken place at Kenilworth: Robert Dudley’s wooing of Elizabeth I, the Virgin Queen, in 1575.

The dynastic ambitions of Robert Dudley, Earl of Leicester, came to a head that summer when he entertained the queen on her fourth and final visit to Kenilworth Castle between 9 and 27 July. The Queen stayed 19 days, the longest she had ever lingered at a courtier’s house, and Dudley wasted not a moment of that time, filling it with opportunities to indulge the passions that he shared with the monarch for dancing, riding and hunting. These were public events, carefully choreographed, with many a ‘spontaneous’ masque or pageant. Wherever the queen went she was met with music and poetry performed by nymphs and demi-gods, designed to create a sense that the landscape around Kenilworth was alive with the denizens of Arcadia, whose laudatory orations in poetry and prose recognised in Elizabeth I one of their own kind: an immortal semi-divine virginal queen.

But Dudley had designs on that chastity, and his ambitions were focussed on the garden he created in the very latest continental Renaissance style specifically for wooing the queen. This outdoor room, as lavishly furnished and as colourful as any of Kenilworth Castle’s interiors, was to be a place of privacy for the use of himself, the Queen and a few select courtiers. Here, according to an eyewitness account, was a place of pleasure designed to appeal to all the senses, with the ‘the pleasant whisking wind … the delectable coolness of the fountain … the taste of delicious strawberries, cherries or other fruits … the fragrance of sweet odours breathing from the plants, herbs and flowers … the sound of natural melodious music and the tunes of birds’.

Literary sources
Dudley’s enterprise did not succeed — Elizabeth was too well aware that much of her political power would pass to others if she were ever to marry — but so unusual (for England) was the garden that he created that this short-lived Paradise became the talk of Tudor England — talk that was fuelled by two detailed accounts of the July 1575 festivities.

One was published by the poet and actor George Gascoigne, whose book, The Princelye Pleasures at the Courte at Kenelwoorth (1576), gathered together the scripts that he and others had written for the dramatic entertainments performed for Elizabeth, complete with stage directions. The second was an account of the revels published in 1575 in the form of a privately printed Letter: wherein part of the Entertainment unto the Queenz Maiesty at Killingworth Casle in Warwik Sheer in this Soomerz Progress, 1575, iz signified; from a freend officer in attendance in the Coourt, unto his freend, a Citizen and Merchaunt of London.

The author of this letter — the ‘officer in attendance in the Coourt’ — identifies himself as Robert Laneham and he tells us that he gained access to the private garden one day ‘when the garden door was open and her highness out hunting’. The letter goes on to give a very detailed account of the garden — so precise that it includes the dimensions of the flower beds and of the garden’s crowning glory, a great fountain of ‘rich & hard white Marbl’, raised on a four-foot high platform, in which a pair of Atlantes supports a globe from which water pours out of spouts into a basin filled with fish – the eight sides of which are carved with erotic scenes from Ovid’s Metamorphoses. The author notes that those whose passions are inflamed by viewing these scenes are likely to find their ardour doused by the fountain which spurted ‘with such vehemency’ as to ‘moysten [them] from top to toe’.

Previous “It’s a long, long way to Tipperary”: the archaeology of the Great War at Otterburn Next Sidestone Press: Publisher of Archaeology Books