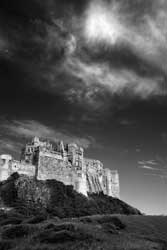 The Bamburgh Research Project is picking up the pieces of the archaeological work started by legendary eccentric Dr Brian Hope-Taylor, who had left virtually no record of his excavations — or so it was believed. The story of Bamburgh is two-fold: before properly investigating the site, the team must first excavate the archaeologist who worked there 60 years ago.

Bamburgh Castle is one of those places that once visited are rarely forgotten. A large Medieval castle, re-built as a stately home at the beginning of the 20th century, it lies on an undulating outcrop of dolerite bedrock that stands up to 30m above the surrounding countryside. Sited dramatically between the modern village and the beach, it is one of Northumberland’s premier tourist attractions. The great archaeological potential of the site prompted the establishment of the Bamburgh Research Project (BRP) in 1996. 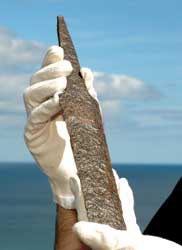 Bamburgh Castle is a natural fortress which has held a place of importance within the region throughout history, appearing in written records first as a British site (Din Guaroy) in the 6th century, and subsequently becoming one of the principal royal centres of the Anglo-Saxon kingdom of Northumbria. Bamburgh became an English Royal castle in the 11th century AD, and remained so until it passed into private ownership at the beginning of the 17th century.   Prior to the foundation of the BRP, the first systematic excavation of Bamburgh was conducted by the late Dr Brian Hope-Taylor, of Cambridge University.
Hope-Taylor’s interest in Bamburgh seems to have stemmed from his previous work at the Anglian royal site at Yeavering, some 25km to the west of Bamburgh. Hope-Taylor believed Bamburgh, being in the first tier of royal centres, would make an interesting parallel to Yeavering and aid in its interpretation. Indeed, his work at Bamburgh closely followed on the Yeavering excavation, as his initial campaign was undertaken between 1959 and 1962. He described the first phase of work in two short articles in the University of Durham Gazette, which discussed the excavation of a trial trench in the centre of the west ward and two further trenches outside the castle gate. The archaeological potential of the site clearly captured Hope-Taylor’s imagination, as he returned for a much more extensive campaign of excavation between 1970 and 1974. Sadly, this phase of investigation was never completed and no publication had resulted at the time of his death in January 2001. 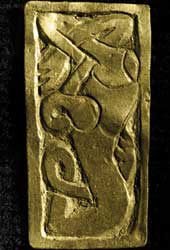 Dr Hope-Taylor loomed substantially in the minds of the small group of archaeologists who initiated the Bamburgh Research Project. Following in the footsteps of such a famous name seemed a little daunting, but also, without knowing the extent of his work within the castle, we would struggle to integrate our own studies with Hope-Taylor’s original work. It was perhaps this, as much as the interest of the site itself, which prompted the initial excavation undertaken by the BRP, concentrating on the identification and investigation of an early Medieval burial site beyond the castle gate.

Nevertheless, the fortress is the heart of the site and understanding its archaeology was the key to gaining an insight into Bamburgh’s place in the region’s history. The obvious place to start was in the west ward, where Dr Hope-Taylor had located his original trenches. Documentary survey, resistivity and ground-penetrating radar surveys were undertaken prior to excavation and, together with anecdotal evidence from those who remembered Hope-Taylor at Bamburgh, we identified the general area of the 1970s excavations well enough to at least allow a trial trench to be sited with some confidence within the west ward in 2000. 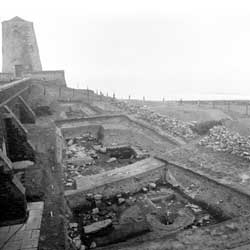 This 30m by 2m trench, oriented broadly north to south, as much by good fortune as planning, identified the east side of Hope-Taylor’s main excavation trench. After that, it was a relatively simple task to follow the edge during the next season to reveal a substantial, trapezoidal, open area excavation, divided by a central baulk. The full trench was emptied to the base of the original excavation, with the exception of the southern 3m, where a service pipe had been inserted in the intervening time between the BRP and Hope-Taylor excavations. This was a relatively easy task, as the bottom of the trench had been covered by Hope-Taylor and his dig team at the end of the 1974 season with a mixture of polythene fertilizer sacks and tarpaulins, weighed down by stones and timber.

The day of the great unveiling, when the tarpaulins and sacks were peeled back, was memorable for its drama as well as the complexity of the archaeology revealed — made all the more interesting by the presence of section strings, nails and occasional marker tags left in situ. Clearly, Hope-Taylor had left with every intention of returning in a later season. Once cleaned, the trench was extensively recorded by photography, plan and section. A strategy to excavate a parallel trench on the east side of Hope-Taylor’s was formed, with hope that it would provide sufficient insight to allow a basic interpretation of what had been excavated during the 1970s. However, its primary function would be to provide an independent sample of the west ward stratigraphy.
In the best tradition of archaeology, no matter much we try to plan ahead with a research design, it is events and unexpected discoveries that ultimately take over and drive us forward. In this case, the event was the death of Dr Brian Hope-Taylor in January 2001. Prompt action by the Royal Commission on the Ancient and Historic Monuments of Scotland (RCAHMS) and English Heritage, led by Diana Murray of the RCAHMS, rescued the archaeological archives that had been kept in Dr Hope-Taylor’s flat and garage. These priceless records included finds as well as written, drawn and 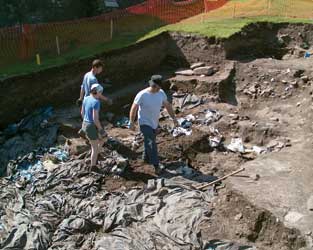 photographic records; many in a poor state of preservation and rather mixed. This timely intervention saved an invaluable record of Dr Hope-Taylor’s life’s work. Bamburgh was thankfully well represented amongst this rescued material, allowing a substantial body of finds to be returned to the castle along with a digital copy of the records and photographs.

In the summer following Dr Hope-Taylor’s death, providence again intervened and an unexpected discovery played its part in guiding the course of our project. In an effort to provide some site office space for the current excavation, a series of rooms built into the landward wall of the west ward were investigated by the castle groundsman. The locks had long since corroded in the sea air and the doors had to be forced open with a crowbar. 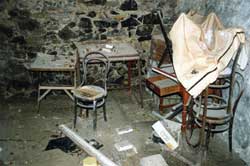 The first we room entered was at the southern end and proved to be a double room divided by a crosswall. Within it were desks and chairs, a kettle, milk bottle and a copy of the Daily Telegraph dated to 1974. The date of the newspaper coincided with Hope-Taylor’s last excavation season. From that evidence, it seemed clear that this was Brian Hope-Taylor’s site office. To the north of the double room, a smaller single room contained tools and a series of palaeoenvironmental samples. The most intriguing items were four plaster casts, three taken from an archaeological surface and the fourth a single hoof print.

Previous The End of Roman Verulamium Next Ice Age: archaeology and the climatic rollercoaster